Last night animal welfare charity Andjeo Sarajevo were contacted about a tortured dog in Vlakovo, a small village north-west of Sarajevo. Someone had tied a wire around the dog’s neck and leg. When Andjeo Sarajevo arrived, they found a sad little female dog, weighing only around 10kg when she should weigh at least three times this much.

She was clearly frightened, afraid of her own shadow. A sharp wire was deeply embedded in her neck and leg.

We don’t know how long she has howled, how long she’s been suffering like this. A long time. Her leg is completely atrophied, has developed sepsis and is deformed, with all the skin peeled back… a living horror. Andjeo Sarajevo caught her by using a low dose sedative, it was the only way as she was so terrified and would not let anyone close. They took her straight to a vet, and under the bright…

UPDATE:  The Parks and Wildlife Commission last night pulled the gassing issue off the agenda for tomorrow’s meeting. No reason given.  The commission expects to hear the issue at its next meeting on March 27, a few weeks AFTER the Sweetwater Roundup.  Meanwhile, keep your comments coming (see below).

My latest, for Takepart:

Here’s an entertaining outdoorsy idea for springtime in Texas: Fill a garden sprayer with gasoline, and go around spraying the fumes into the cracks, crevices, sinkholes, and caves where rattlesnakes make their dens. Do it early in March, when the snakes are just drowsily waking up from their winter hibernation and too helpless to defend themselves.

Then as the snakes escape to the surface to flee the noxious fumes, pick them up, toss them in a sack, and bring them to the “world’s largest rattlesnake roundup,” held on March 8 and 9 in Sweetwater, Texas.  It’s…

Defenders of Wildlife is bringing the U.S. Forest Service to court over their violation of several federal laws. Acting on the request of powerful anti-wolf interests the state of Idaho issued a kill order for two packs of wolves living in federally protected wilderness, to boost elk populations for sport hunters – and the USFS has allowed them to do it.

Help us get justice for America’s wolves! http://dfnd.us/1ddzgVz

Keep wildlife in the wild – and protect it !!

First migrants and recent immigrants were rounded up from Greece’s streets and forced into internment camps.Then they threw the drug users in. Next came the sex workers, forcibly HIV tested, publicly humiliated, and imprisoned.

Now they’re coming for transgender men and women — and the list of “undesirables” just keeps longer.

Operation Zeus is a cleansing campaign targeting and imprisoning the most vulnerable members of Greek society, accompanied by spikes in racism, gender hate and homophobia.

There are now at least 5,000 people languishing in these hellholes simply for existing — and this month, while warning trans* men and women to “return to normal” or else, the Greek government announced that camp capacity is about to double.

We call on the EU member states to put the pressure on Greece now to stop this abhorrent cleansing campaign now. We can…

An interesting Map of what the body looks like compared to emotions!!!http://sitsshow.blogspot.com/

This data is very interesting in relation to the Ancient Mysteries and The Alchemical process of realizing yourself and attaining Self Mastery. This post goes well with Emotional Guidance Scale (Explained in detail) How to be guided by your emotions, instead of controlled by them. By Justin. And the post True Health: How to Tap Into the Healing Abilities of Your Chakras.

Our Emotions, (E-Motion Energy in Motion) reflect to us physically, what we have created within, our RE-Presentation of the Truth. Below we can see the mapping of our emotions on the body itself, which helps us in our NOW moment of experiencing them, because we can channel those energies into our actions; both within and without. This could be thought of as the Caring aspect, the Divine Feminine.

January 21st, 2014. The 45 pilot whales refloated in Golden Bay yesterday have been sighted swimming in deeper water this afternoon, a Department of Conservation spokeswoman says.

A pod of 46 pilot whales was refloated at Puponga about midday yesterday and the whales were milling off Farewell Spit yesterday afternoon.

One dead whale was found on Farewell Spit this morning.

A pod of pilot whales were sighted about 2 kilometres offshore this afternoon, suggesting the whales had successfully made their way into deeper water, a Department of Conservation spokeswoman said.

The sighting around the other side of Golden Bay from Farewell Spit, off Pohara, was “really good news”, she said.

About 62 whales stranded early on Saturday morning and again on Sunday after being refloated.

Some died in stressful conditions and others were murdered.

January 20th, 2014. FORT MYERS BEACH, FLA. –  Two pilot whales have died and two were euthanized after they beached themselves in southwest Florida.

Kim Amendola of the National Oceanic and Atmospheric Administration’s Fisheries Service said the mammals were among a group of about four dozen whales that swam into shallow waters Sunday and Monday.

NOAA regional stranding coordinator Blair Mase said necropsies would be performed on the dead whales. She said the surviving whales were listless and emaciated.

In Lee County, a handful of the mammals were stranded near shore, while more than a dozen others were seen swimming nearby. Yet another dozen were spotted farther offshore.

Opponents claim the plan to bait and kill sharks could breach state and federal laws, as well as international agreements

Lawyers for a loose-knit coalition of groups, including the Greens, the Conservation Council and Western Australians for Shark Conservation, are looking at whether the plan to trap and kill large sharks is legally possible.

At a state level, the cull policy could run contrary to the Wildlife Conservation Act of 1950, as well as the Fish Resource Management Act of 1994.

Federally, the environment minister, Greg Hunt, has to exempt WA from the strictures of the Environmental Protection and Biodiversity Conservation Act for the cull to proceed. The act requires a federal assessment… 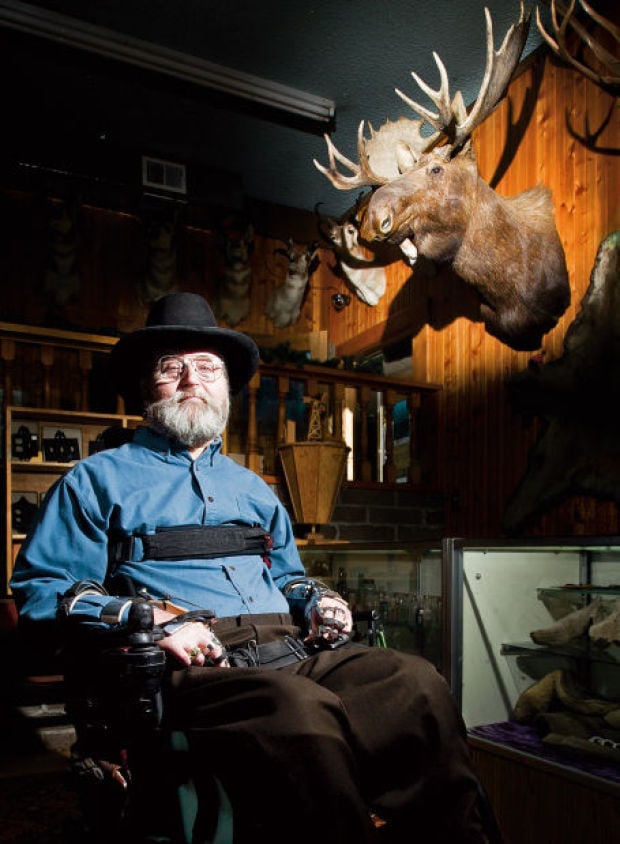 Owner William ‘Rob’ Vogel poses in the trophy room of the Boardwalk on Friday afternoon in Laramie with a moose he bagged with a .300 Winchester Magnum while on a hunting trip to northern British Columbia in 1975.

LARAMIE — It’s called the trophy room, and it sits on the west side of the longtime west Laramie business, The Boardwalk.

Inside, more than 50 trophies of all shapes and sizes are mounted on the wall and displayed in cases, along with saddles, antique guns, American Indian artifacts and family heirlooms. The room is open to visitors who pass through the store.