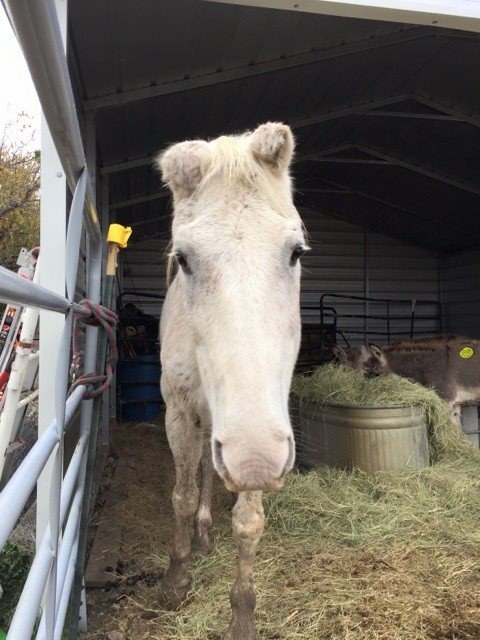 Frisco, TX – A senior white horse with short ears destroyed by frostbite wasn’t on the rescue list at a kill pen in Frisco when Becky’s Hope was saving 9 mini donkeys from shipping to slaughter. Becky’s Hope had raised the funds needed to rescue the 9 miniature donkeys but were not planning on saving any other animals. The white horse saw the donkeys loading up, and determined to be on that trailer.

The white horse pushed his way through gates, down alleyways, passed yelling workers trying to stop his forward progress, but nothing would stop the horse. He reached the trailer, climbed aboard, and tried to melt into the herd of donkeys. “I firmly believe that he thought if he mixed in with the mini donkeys we wouldn’t notice. He’s like I’m just one of them. Got on the trailer with them, stood there like you don’t see me, and kept his head kind of down,” Sue Champman of Becky’s Hope told reporters.
The rescue paid $450 to the feedlot rather than turning the white horse out, and promptly named him Bubbles. He is doing very well at the rescue. You can follow his progress on the Becky’s Hope Facebook page. 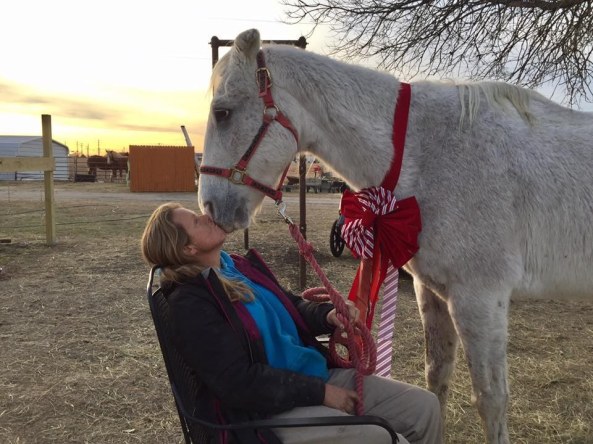 Bubbles after being rescued.

Copright (C) 2016 News of the Horse, a subsidiary of Animal News, LLC

11 comments on “Horse Rescues Himself From Slaughter”