There’s a large recall affecting bagged salads in 10 states. Dole Fresh Vegetables, Inc. voluntarily initiated the bagged salad recall affecting four brands due to the risk of listeria contamination, according to an announcement on the U.S. Food and Drug Administration (FDA) website. The company decided to recall the salad products on October 29, 2021, after a bag of salad tested positive for Listeria monocytogenes, the pathogen that causes the potentially foodborne illness listeriosis.

Not all bags of these products are being recalled—only a “limited number of cases” is affected, according to the FDA notice. All of the recalled bags have a best if used by date of October 25, 2021, meaning they should no longer be available at grocery stores. However, consumers who have already purchased the salads may still have them in their fridges.

Officials discovered the risk of contamination when a random sample test of a single bagged garden salad, conducted by the Department of Agriculture in Georgia, came back positive for Listeria monocytogenes. There are no reports of illness associated with the recalled products, according to the FDA. Dole describes the salad recall as “precautionary.” The company noted that it’s working closely with regulatory officials on the issue and that no other products made or sold by Dole are affected by the recall.

A new CDC study (inadvertently?) finds 28 times more fully vaccinated patients (5,213) were hospitalized with COVID from June to September than the unvaccinated with prior infection (189) in nine U.S. states.

The CDC was apparently hoping this study would demonstrate the superiority of vaccination relative to natural immunity from a prior infection so they could compel more Americans to get vaccinated. It may have backfired. 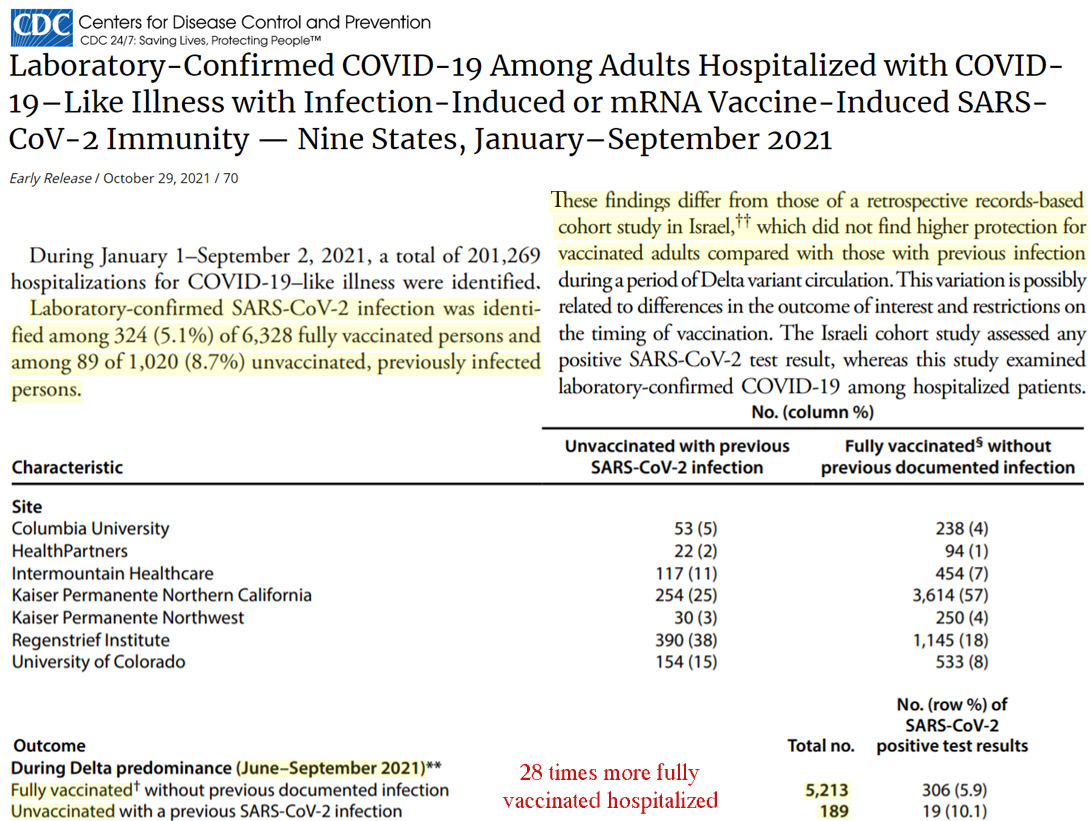 Out of 201,269 people hospitalized with “COVID-19-like illness” from January to September (2021) in 9 states, just 1,020 (0.5%) of the hospitalizations occurred in unvaccinated people previously infected with COVID. This is a remarkably small number considering the CDC has estimated 120.2 million Americans (36.8% of the US population) had already been infected with COVID by late May.

Out of these 1,020 unvaccinated COVID patients landing in the hospital from January to September, 89 (8.7%) had tested positive for COVID… 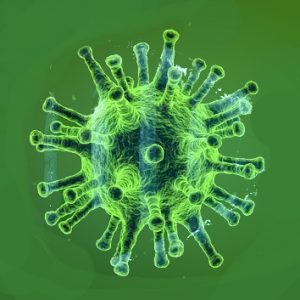 A new study shows vaccinated people are about 40% less likely to catch Covid, but if or when they do catch it they pose the same risk to the people close to them regardless of their vaccination status.

The study also confirmed that vaccinated immunity was falling within three months of vaccination. Presumably, if a vaccinated person is 40% less likely to catch Covid in the first place, then being vaccinated will reduce the odds of bringing the SARS virus home on any given day. But given that protection wanes so quickly and Covid has such a high exponential rate of spread, a temporary 40% reduction of the risk of catching the virus is not game-changing.

The Imperial College study shows that draconian rules isolating the unvaccinated from the vaccinated are not medically justified. Put another way, an unvaccinated person infected with Covid is no more likely to spread the…

Stephen Miller, a former senior adviser to former President Donald Trump, said Friday that the notion of compensating illegal immigrant families with $450,000 for the trauma of being separated at the southern border is “insane.”

Miller’s reply was to Brian Kilmeade with Fox News, when he asked Miller his opinion on the report that the Biden administration is reportedly contemplating $450,000 in compensation for illegal immigrant families who found themselves separated at the southern border under Trump. “Well, first of all, that’s insane,” Miller answered.

“Secondly, this issue is widely misunderstood. You’re talking about individuals who commit a federal crime, who were criminally prosecuted and who, during the pendency of their incarceration, were separated from their families. There are literally millions of American citizens who have been criminally prosecuted and separated from their families.”

Miller also noted that Vice President Kamala Harris, in her former role as a prosecutor, “presided over many low-level drug offense prosecutions. There are thousands and thousands of families living in her home state of California who were separated, not for days, but more months or years for drug offenses.”

“Are they getting any kind of reparations payment? Any kind of settlement? I don’t think so,” Miller said. “No American citizen who goes to jail is then given reparations, let alone half a million dollars per family member. Nothing like this has ever been attempted in the history of the world.”​

What are your thoughts America, is Biden a moral disaster?

Support our work by getting our gear at FAITHNFREEDOMS.COM

Even CNN is calling out Biden's horrendous poll numbers. pic.twitter.com/S36YNzCGYj

The Big Cat Public Safety Act is a critical animal protection bill that would protect thousands of big cats from suffering. Big cats belong in the wild, not in someone’s backyard. In her natural habitat, a tiger’s territory stretches for miles. She can’t thrive when she’s chained in a basement or confined to a barren cage. It’s time for our elected officials to pass the Big Cat Public Safety Act into law.

Big cats such as lions and tigers are wild animals and belong in the wild. Yet today, there are more tigers in captivity in the United States than in the wild. Individuals and families often purchase them as babies to be kept as pets, ignoring just how large the animals grow. As a result, many are left to waste away in cages in backyards and basements. The Big Cat Public Safety Act would help end this cruelty.

The Big Cat Public Safety Act amends the Captive Wild Safety Act to prohibit the private possession of lions, tigers, leopards, cheetahs, jaguars, cougars, or any hybrids of these species. People who already possess these animals may keep them but must register them so first responders and animal control officers are aware of their presence in the community.

What the Big Cat Public Safety Act will do

NEW VIDEO – HAPPY #HALLOWEEN. No more tricks for these #rescued circus animals, only treats. Enjoy as lions & tigers rescued from circuses in Peru, Guatemala & Colombia have fun with pumpkins at the ADI Wildlife Sanctuary in South Africa this week.#HappyHalloween2021 pic.twitter.com/1Affj3qDyL