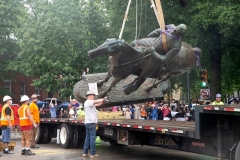 (CNSNews.com) – Carol Swain, a former Vanderbilt Professor and an advisory board member with Black Voices for Trump, told Fox News Wednesday night that the ultimate goal of the recent protests, vandalism, and occupation is the destruction of the United States.

“It’s not about police brutality or racism,” Swain said:

I would say that it’s part of a global movement to destroy the United States as we know it. And its roots are in Marxism, and anyone that studies Marxism knows where it goes. It goes to communism. And that’s where we are headed.

So the activists that you see out there today, they have an agenda. They are well-organized. The uprisings are not spontaneous. The grievances of black people and others that are oppressed are being used to advance an agenda, and if they succeed in destroying America, I guarantee you…