Muhammad Ali was a wonderful man and father! 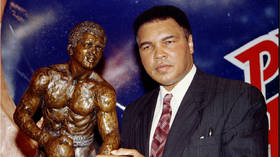 Muhammad Ali’s only biological son says his father would have despised the “racist” Black Lives Matter movement and endorsed all races, never singling “anyone out.”

‘‘My father would have said, ‘They ain’t nothing but devils.’ My father said, ‘all lives matter,’” Muhammad Ali Jr. told the New York Post.

The 47-year-old son of the legendary boxer, who is often noted as a cultural trailblazer for black Americans, did not stop at connecting his father to the “all lives matter” position. He also said Ali would have supported President Donald Trump — the late athlete endorsed both Democrat Jimmy Carter and Republican Ronald Reagan when they were running for the presidency.

One comment on “‘THEY AIN’T NOTHING BUT DEVILS’: Muhammad Ali’s son says father would have HATED ‘racist’ BLM movement | RT – Daily news”