According to vetted rumor, US Senate bill S386, which gives almost all work related green cards to people from India, will be up for a vote in the US Senate next week. For more information and updates see: https://twitter.com/USTechWorkers/status/1233245702232342528

The definition of STEM is actually so broad that it even includes sociology 🙄. However, the screen shot from the New York Fed, found below, shows high levels of unemployment and underemployment in areas that we commonly think of as STEM, such as Math, Physics, Chemistry, Engineering, Information Systems and Management, and Computer Science. 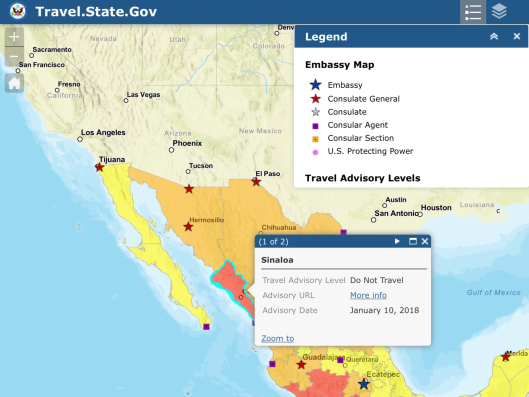 A man in Mexico City who recently visited Italy tested positive Friday, and another patient was confirmed in the northern state of Sinaloa. Brazil is the only other country that has coronavirus in Latin America.

In the United States, the Centers for Disease Control and Prevention…

Below we see the types of health coverage in OECD countries.  Bernie Sanders continues to mislead people on this topic.  There is great variation. Many countries do force their citizens to buy health insurance, i.e. “compulsory health insurance”. Some of this health insurance coverage only allows treatment within the local county or region. It’s not a socialist wonderland.

P. 10 http://www.oecd.org/officialdocuments/publicdisplaydocumentpdf/?cote=COM/DELSA/GOV(2019)2&docLanguage=En
Denmark has “government schemes” based on taxation, but is decentralized into regions and previously in counties.  In the Canadian system providers are mostly private and the provinces (i.e. states) tax and administer the system.  If you move to another province you have to get private insurance for several months, until you are covered. None of these have the highly centralized system that Bernie Sanders’ “Medicare for All” proposes.  The closest is probably France, which is a much smaller country.  France and Canada put caps on fees charged, however, whereas… 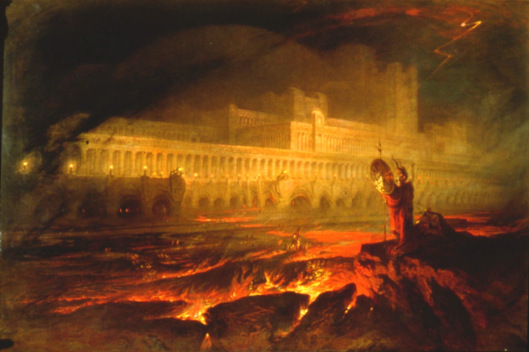 Remember that the Trump administration is sitting on Bernie Sanders’ FBI file. If Bernie is the nominee, you can expect this file to drop as an October surprise 🤣: https://www.muckrock.com/foi/united-states-of-america-10/bernie-sanders-fbi-files-71171/ Wake up Berniecrats before it’s too late, and vote for a candidate who didn’t go to a Marxist Zionist Kibbutz in Israel when he was in his early 20s; vote for a candidate who wasn’t an elector for a Marxist-Leninist political party (SWP), when he was in his late 30s/early 40s; vote for a candidate who didn’t honey-moon in the Union of Soviet Socialist Republics, when he was 47. Bernie was middle-aged.  This wasn’t the confused idealism of youth. And, let’s not forget that Bernie had no qualms about dumping Vermont nuclear waste in Texas.   Coincidence or not, Bernie’s Marxist-Zionist kibbutz stint links him to Trump mega-donor Miriam Adelson, as well, through the Mapam party. According to the Jewish…

As of December 2019, 41% of recent graduates and 33.8% of college graduates were working in jobs that do not require a college degree. Whereas traditionally underemployed means not working full time, here the definition is people working in jobs that shouldn’t require a college degree. These include STEM workers: https://www.newyorkfed.org/research/college-labor-market/college-labor-market_compare-majors.html 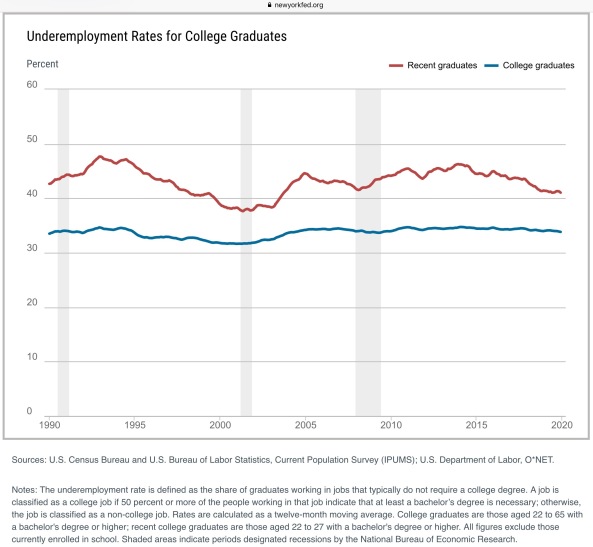 Not only would Bernie Sander’s plan not pay for free four year college for everyone, it could undermine free community college programs, by shifting state funding to more costly four year colleges-universities.

Under Sanders’ plan, the Federal government would provide $47 billion per year to eliminate tuition and fees at public colleges and universities. He apparently assumes a steady-state total tuition of $70 billion per year, so that it would cover 67% and assumes that states would fund 33%. However, free college-university means that, unless entrance is restricted, the number of students attending would increase, so the amount that $47 billion covers would decrease. Additionally, not all states would be willing or able to pay the 33%.

Furthermore, it is unclear how this would impact the ability of states to provide free community college. The state funds risk being shifted from two year community colleges, where they are better used…

The extremely poor and the disabled are covered by Medicaid in the United States, and senior citizens are covered Medicare and/or Medicaid. The chart below shows the types of health coverage in OECD countries.  Bernie Sanders continues to mislead people on this topic.  As can be seen, there is great variation. Many countries force their citizens to buy health insurance, i.e. “compulsory health insurance“, as can be seen below. If they are forced by law to buy health insurance, of course they are covered by health insurance!Some of this health insurance coverage only allows treatment within the local county or region, so that it is cheaper.  This most basic insurance is non-profit. Such is the case for Switzerland, which WHO says still spends more than the US on health. The OECD says it spends a bit less: https://en.wikipedia.org/wiki/List_of_countries_by_total_health_expenditure_per_capita. Bernie’s brother Larry Sanders is very worried about the…

Greek Prime Minister Kyriakos Mitsotakis: “Significant numbers of migrants and refugees have gathered in large groups at the Greek-Turkish land border and have attempted to enter the country illegally. I want to be clear: no illegal entries into Greece will be tolerated. We are increasing our border security. Greece does not bear any responsibility for the tragic events in Syria and will not suffer the consequences of decisions taken by others. I have informed the European Union of the situation.” Feb 28, 2020, ca 4.30 pm: https://archive.li/kOsBM https://archive.li/vY0E3
Greek PM: https://en.wikipedia.org/wiki/Kyriakos_Mitsotakis

This was four years ago at the Greece-Macedonia border, but gives some sense of the situation:

By Michael Tutton The Canadian Press

A U.S.-based conservation group has chosen a site in Nova Scotia where it plans to build a kind of retirement home for whales raised in captivity.

The Whale Sanctuary Project announced Tuesday that it wants to provide a home for about eight whales in a 40-hectare inlet southeast of Sherbrooke, N.S., at Port Hilford, along the province’s rugged and lightly populated Eastern Shore.

Charles Vinick, director of the non-profit group, says it still requires provincial and federal permits and an estimated $12 to $15 million for capital costs.

The project involves installing nets to enclose an inlet, creating an area where the retired orca and beluga whales are free to swim and dive deeply, while still being fed and cared for by the group.

Vinick says consultation work will continue with the small communities in the area, as well as with a group of lobster fishermen who have fished the local waters.

However, he also says strong community support for the project has been key to selecting the Nova Scotia option over possibilities in British Columbia and Washington State.

Vinick says the pristine waters about 200 kilometres northeast of Halifax offer an expansive area in a bay that’s open to the ocean but is sheltered from storms.

He says his group’s past experience with captured whales is that they cannot re-adapt to life in the wild without assistance.

“You might think of it as retirement, or assisted living. These whales have raised tens of millions of dollars for their park owners, and they’ve entertained millions of people, and we owe something back,” said Vinick.

The plan to locate a sanctuary in Nova Scotia comes in the wake of Parliament passing Bill S-203 last year to bring an end to the captivity of whales and dolphins in Canada.

Marineland, Vancouver Aquarium shipping beluga whales out of Canada ahead of new law

“In the confines of a concrete tank at a marine park they suffer chronic stress and then often fatal illness. Relocating them to an ocean environment will give them a healthier life where they can thrive.”

Dr. Stephen Flemming, director of the nearby Sherbrooke Village Museum, said in a news release that he’s “delighted at the prospect of having a whale sanctuary nearby.”

Vinick said the group intends to work with schools and museums to offer educational programs about the whales at the sanctuary and their counterparts in the wild.

The Whale Sanctuary Project’s objective is to have the sanctuary ready to receive whales by the end of 2021.

Vinick estimates the annual cost will be $2 million – including a veterinary clinic staffed full-time and a nearby interpretation centre.

This report by The Canadian Press was first published Feb. 25, 2020.