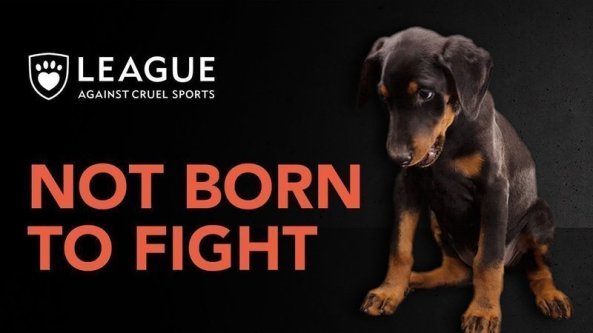 change.org
League Against Cruel Sports started this petition to UK Parliament and 1 other

Dogs are being bred and shipped across the world – including to the UK – to take part in dog fighting.

It’s one of the most horrific forms of organised animal cruelty, not only for the violence the dogs endure during fights but because of the trauma they suffer throughout their lives. Training methods brutalise and fights inflict untold physical and mental suffering on ‘man’s best friend’.

League Against Cruel Sports investigations suggest there are hundreds of dogs being used for dog fighting in the UK. Many will die in the ring or shortly after from their injuries. We hope our work will lead to more people involved in dog fighting being caught, locked up and banned from ever owning another animal.

Dogs are not born to fight. Dog Fighting is a heinous crime, showing humanity at its very worst and needs to be stopped.

But that can’t happen without stronger laws and more decisive action.

A stronger legislative environment to tackle dog fighting, which treats it as a distinct crime, attracts more robust penalties, prevents its promotion and ensures animal abusers cannot keep animals in future.
Police and law enforcement agencies to do all they can to tackle dog fighting, treating it more seriously and recognising it as a ‘gateway’ crime
The replacement of Breed Specific Legislation with a system focusing on ‘deed not breed’, as all dogs can be forced to fight – it is the owner’s behaviour that’s the determining factor.
Strengthened border controls and pet transport rules to prevent the cross-border movement of dogs for fighting.