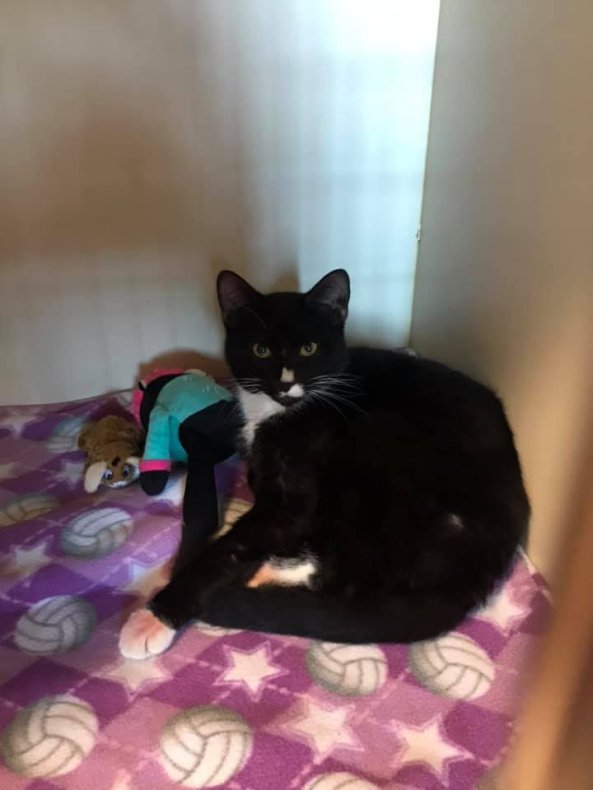 Dogfighting is a horrible blood “sport” in which dogs are forced to aggressively and violent fight each other for the entertainment or profit of humans. Horrible people gamble over the suffering and violence between animals. Many dogs suffer tremendously not just when forced to fight, but when used as bait dogs. But dogfighting affects other animals too. Cats and rabbits are also used as bait in dogfighting rings. It’s as horrifying as it sounds.

In order to train dogs to develop a blood lust, part of that involves tying up other animals and painting them red to teach the dog to chase and maul them and tear them apart. It’s sickening and disgusting.

A cat that was going to be used in this appalling way thankfully somehow got away and was rescued!

On Tuesday, February 18th, a UPS driver found a black and white kitten whose white fur had been dyed red. Thankfully, the driver saved the kitten and took him to Southside Animal Shelter nearby.

The shelter explained that among animal rescuers, it’s common knowledge that a cat with fur dyed red means they were being used in dogfighting rings.

News site WTHR also explains: “In dog fighting, many times cats and kittens are dyed different colors with people then betting on which one will be killed by the dog first, put up the best fight or survive the longest.”

The sweet cat has since been named Cosmo. He needs to put on some weight and get neutered, but then he’ll be put up for adoption. We are so glad he somehow got away from the horrible fate that awaited him and that the kind UPS driver was compassionate and caring enough to get him to safety.