The Mosquito Creek Sportsman’s Club will be hosting its 29th Coyote Hunt on February 21-23rd in Frenchville, Pennsylvania. The annual coyote killing contest is the largest in the nation, not only because of the number of participants, but also because of the tens of thousands of dollars paid out for literally every coyote killed with hounds, guns or traps.

Check-in time at the Mosquito Creek Coyote Hunt in 2019.

Last year, over 4,800 hunters were registered in the two day contest, with 225 coyotes tallied at the weigh-in. The largest cash prize of $9,624 was awarded to a hunter from Erie for the heaviest coyote killed during the contest. Each coyote killed gained the hunter $86, with a total of $48,120 being paid out to contest participants during the 2019 hunt. 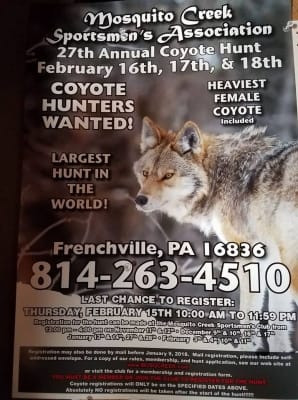 Not only the nation’s largest coyote hunt, but in the entire world?

Many of the participant’s in this year’s…