Police in Texas are asking for the public’s help after a local veteran’s service dog was stolen last month.

Someone took
Rosalyn, a 2-year-old mastiff, from Emmanuel Bernadin’s home after
breaking in on Oct. 19, according to the Arlington Police Department. 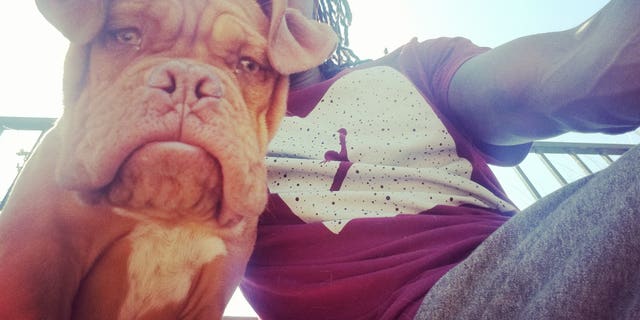 The perpetrator also stole “several other items,” the department said. But Bernadin told Fox 4 News he just wants his companion back.

“She’s the sweetest thing,” he said. “The days are just really hard without her.”

Arlington Police Lt. Chris Cook said there are no suspects or witnesses at this time.

“People
don’t just steal dogs,” he told Fox 4. “It’s just not a common theme,
so we’re kind of baffled as to who would think in their right mind,
‘We’re not only going to take your property, but we’re going to steal
your dog.'”

Police are asking anyone who might have information to
call the Arlington Police Department at 817-459-6482 or leave an
anonymous tip with Tarrant County Crime Stoppers at 817-469-8477.

HOW TO FIND YOUR LOST DOG, ACCORDING TO A PET DETECTIVE

Bernadin, an Iraq War veteran, told Fox 4 he was with a friend when he got a call from a neighbor telling him his sliding glass door was open.

He went home and found Roz was gone. Jewelry and electronics were also stolen, he said.

“I deal with a lot of night terrors,” Bernadin told Fox 4. “It’s very hard
to turn off the conditions of war, and Roz is there to wake me up at
times when I shouldn’t be alone by myself asleep.”

The veteran said he enlisted in the Navy in 2007 and served two tours in Iraq and Afghanistan, medically retiring after his second tour.

Venomous snakes are a threat not only to humans, but to pet dogs and cats as well; an estimated 300,000 dogs and cats are bitten by venomous snakes each year in the United States.  The bites from these venomous snakes can cause severe injury and death to companion animals so pet owners living in regions that are home to venomous snakes often opt to get their pets vaccinated with the controversial* rattlesnake vaccine.  The downside to these anti-venom vaccines, as well as emergency medical treatment for humans and pets who are bitten, is that the vaccines need to be tested on lab animals. But that may soon change.

Sunny Fame, Only Money, Rapid Feet are the names of just some of the thoroughbred racehorses that have been killed in Australian slaughterhouses this year. These horses were once fierce competitors on the race track, but once their owners decided they have outlived their use, they were shipped out to slaughter.

The racehorses are then butchered for human consumption or turned into pet food.

This is happening, despite the practice being against the rules laid out by the sport’s regulatory body Racing NSW which states that all retired racehorses should be rehomed.

A recent expose has uncovered that these horses are being killed on a massive scale with one New South Wales abattoir killing 300 racehorses in just 22 days. The horses are not only dying but suffering. Undercover video shows that the thoroughbreds were teased, beaten and abused before ever being killed.

Perhaps what is most disturbing, is the fact the Racing NSW knew that it was going on for more than a year and did nothing.

The fact that possibly thousands of horses are being slaughtered per year, despite regulatory agency prohibitions proves that these self-imposed industry “slaughter bans” are toothless. Without real government legislation to ensure that racehorses aren’t sent to the knackery, racehorse owners and breeders have no real incentive to dispose of the horses the way they see fit.

The lack of federal regulations on killing racehorses means that Racing NSW’s rule will likely not protect thoroughbreds from being sent to the knackery. The only way to do so is for the federal government to pass a ban on the practice altogether.

Australia has a responsibility to protect its horses from abuse and murder. Currently, that is not happening. But we can change that. Please add your name to the list and ask the Australian government to ban the slaughter of racing horses.