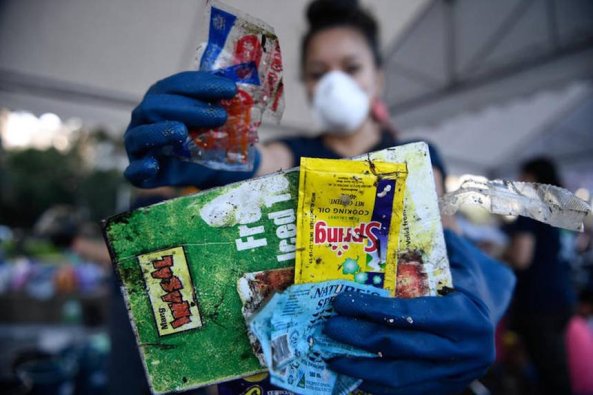 Companies will do anything to protect their brand – maybe even redesign packaging.

Taking a stance against a giant, when you’re only a normal-sized human, requires sharp strategy. Thankfully, Froilan Grate has plenty of that.

Grate is a community activist in the Philippines who has made it his mission to fight the plastic pollution that is overwhelming his homeland. It all started when he moved to the capital for school at age 18. In an interview with NPR, he described the shock of entering Manila Bay and seeing garbage everywhere.

“He felt sick. ‘The contrast of where I grew up, beautiful white sand beaches, clear water, and arriving in Manila where it’s black water with countless plastic, that was shocking to me.’ His first thought at the time, he says, was that his own island would someday end up strewn with plastic as well. His next one was: What can I do to stop it?”

For years Grate headed up local initiatives to improve recycling practices and infrastructure. He spoke to groups about lifestyle changes that would cut down on waste, and joined an organization called the Mother Earth Foundation, working with waste-pickers to get formal employment and better working conditions.

Despite his efforts, every tide brought a fresh wave of garbage to Filipino shores. Grate said, “You realize that despite everything that you do, you really aren’t solving the problem.” He understood that cleanup efforts would never get at the root problem.

That’s when an idea occurred to him. Rather than just collecting plastic trash and removing it to a landfill site, why not leverage the information that came with all that trash and use it to pressure manufacturers to change? That’s when Grate began conducting brand audits – recording the names of the companies that made each individual item and publicize it.

“They feel there is value in brand,” Grate says of the companies. Consumers trust brands. “We wanted to use it against them.”

It was an astute move. As Grate and his team persevered, the rest of the world started to notice. A list began to circulate of the brands responsible for most waste in the Philippines. These are:

NPR writes, “It’s dirty work — eight days of community trash spread in piles on the concrete floor of a fenced-in outdoor basketball court. It stinks; workers wear masks and gloves.” But the effort paid off. Suddenly the power imbalance had shifted. No longer were the bigwigs in corporate offices impervious to the complaints of people on the ground, the same people who had to live daily with the tangible consequences of poor design.

Grate was invited to Washington, D.C., to sit down and talk with the heads of the same companies he was publicly shaming about the problem of plastic pollution. NPR asked Grate if the brand audits had triggered the meeting:

“They weren’t happy about it,” he said of the audits. “And they have questions,” he added, about how his group does them. “But I would say this: The brand audits contributed to the pace of the discussion that’s happening right now.”

Shame is not always an effective tool for change. In personal relationships, it usually causes people to shut down and become defensive. But as in this case, when the power imbalance between corporation and consumer is so great, and when the consequences of a company’s actions are actively harming the consumer and undermining their quality of life, shame can be necessary and justifiable.

Progress is happening slowly. Look at British chip-maker Walker’s, who was pressured by a social media-driven campaign into redesigning its non-recyclable bags. Unilever and Nestlé have both signed on to the Loop project that will offer limited products in refillable packaging.

This holds a valuable lesson for all of us. While not littering remains a decent rule by which to live, we need to shift our focus to the drivers of this waste and not allow them to blame us for not picking it up or sorting it properly. If packaging cannot be recycled or composted, it shouldn’t be used. These companies have the resources with which to develop better alternatives, but up until now they’ve lacked the motivation to do so.

Shame, however, can be a powerful motivator, so don’t hesitate to point fingers when it comes to plastic. Take a page out of Grate’s book and call them out on social media. Post pictures and ask questions. Demand better. We deserve it, and so does our planet.

Companies will do anything to protect their brand – maybe even redesign packaging.