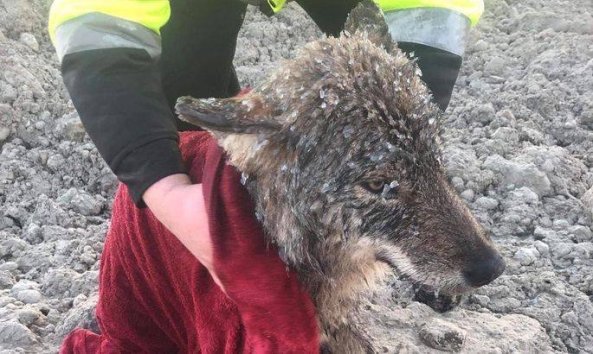 A wolf, first thought to be a dog, is warming hearts everywhere after being rescued this morning from a freezing river in Estonia, a country in Northern Europe.
The heroic rescuers, reportedly named Robin Sillamae and Rando Kartsepp, were working nearby when they noticed the distressed animal in the Parnu River.
After pulling the wolf, who was described as exhausted, hypothermic, and frozen,” from the icy water, the kind-hearted men covered the animal in a blanket and placed it in their car to warm up.
The Estonian Union for the Protection of Animals (EUPA), which received the call for “help with a dog that might be a wolf,” shared the news on its Facebook page; admitting that the situation presented a bit of a challenge. 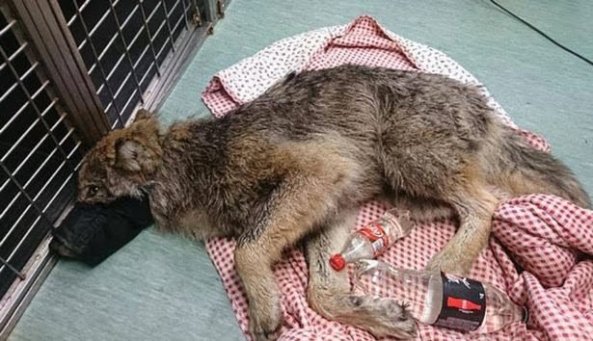 Fortunately, the young men who saved the wolf were able to drive the animal to a clinic where he received immediate treatment that was funded by the EUPA.
The organization shared an update from the clinic which confirmed that the wolf, believed to be born last year, is slowly recovering and sustained no other injuries.
“We have been contacted by the head of the environment agency’s Wildlife Department, Marko Hat, who confirmed that if the wolf is in top-notch health, then they will put a collar on him and release him into the wild,” noted the organization.
The EUPA shared their appreciation for the young men who saved the struggling young wolf, as well as the staff of the clinic, and Marko Hat, who gave them peace of mind, ensuring that the animal would be released to freedom.
The Estonian Union For The Protection Of Animals is a donation-based organization. Please consider making a contribution to the work that they do to save animals in their region.