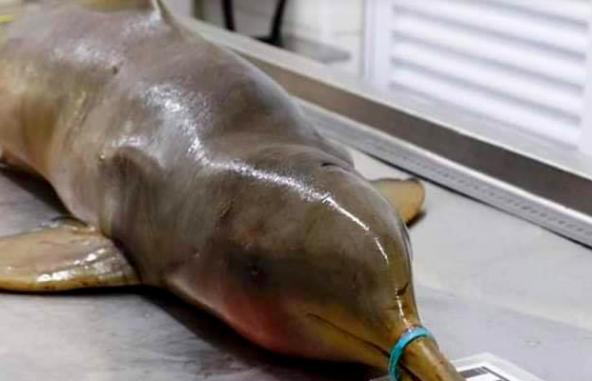 A dolphins beaked is closed shut by a plastic piece, leading to its death. Papa Bois Conservation Facebook.

In a photo shared on the Facebook page of Papa Bois Conservation, it appears to show what is a dolphin dead after a plastic bottle ring got caught on the dolphins beak.

In the Facebook post, the group writes that the animal starved after being unable to open its mouth. “A plastic bottle cap ring got caught on this dolphin’s beak. It starved to death. Isn’t it time to use a reusable bottle.”

Plastic continues to be a major concern to the health of the oceans as levels continue to increase to levels never before seen daily.

At the current pace, plastic in the ocean is expected to outweigh fish by 2050 and that will only increase exponentially if there is not a plan put in place.

Cities and countries around the world are slowly starting to take notice but at a rate which is much to slow to prevent incidents such as this.

The best thing you can do is to reduce your overall plastic usage, talk to anyone and everyone you can, and write to your local businesses, politicians and anyone of influence to try and help end this crisis

If we are unwilling to change for ourselves, lets do it for the rest of the planet.