By Lauren Lewis –
October 16, 2018
Photo from Mpumalanga News
Alleged kingpin, Sydney Petrus Mabuza, and five other key members that have been implicated in the massive trafficking of poached rhino horns, remain in custody after appearing in a court in Africa yesterday.
According to Mpumalanga News, the case, which began deliberations on October 8th, was postponed to Friday, October 19th, during which the bail application deliberations will continue at the White River Magistrate’s Court.
WAN previously reported that 54-year-old Mabuza, known in law enforcement and poaching gang circles as “Mr. Big”, was originally arrested in June of this year. He was subsequently released from jail under strict conditions after initially being denied bail. 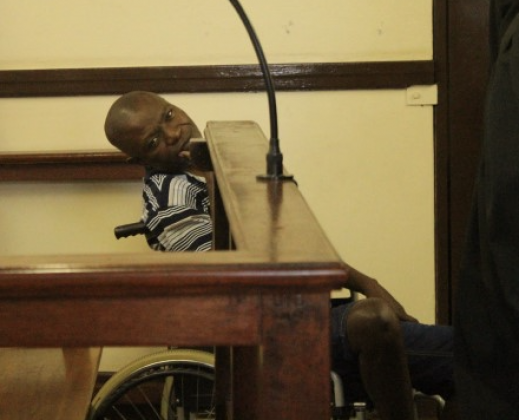 Mabuza will return to court at the end of this week along with suspected syndicate members, Clyde Lubisi, Cloud Mnisi, “Big Joe” Joseph Nyalungu, Aretha Mhlanga, and Rachel Qwabane; all of whom have made numerous court appearances since they were arrested on September 18th and 19th.

Another suspect, Phineas Lubisi, was previously charged with them, but received bail last Monday.
The defense has concluded its arguments and now the state is continuing its case to oppose bail for Mazuba, a man of “considerable means” that could forfeit the money should he post bail, as well as for the other five suspects.
According to the media outlet, “the team members investigating the alleged poaching syndicate recently exposed that they fear for their lives daily” with Captain Leroy Bruwer testifying yesterday that he had been assaulted by protesters who demanded the release of the accused.
Bruwer also alleged that the prosecutor has been threatened.
Calling rhino poaching an environmental and state security matter, Bruwer further noted that, “It is part of the constitutional responsibility to protect endangered species.”
May they be denied bail permanently; sparing the remaining rhinos from the syndicate’s terror, and us from any more of their smug and smiling photos! 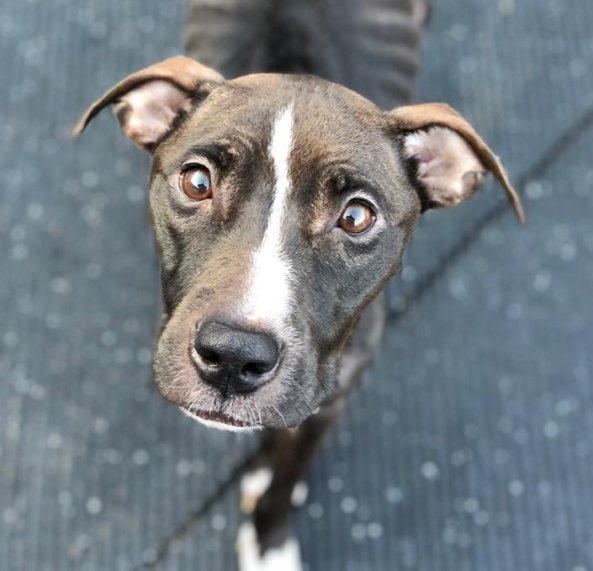 Another heartbreaking case of animal cruelty has resulted in the death of an innocent pit bull in Syracuse, New York.
The painfully emaciated dog, named Mavis, may tragically be gone but the sub-human that abhorrently abused her remains at large; and now, there is a $3,000 reward for information that results in the perpetrator’s arrest and conviction.
“It is with immense heartbreak and sadness that we let you all know Mavis passed away this morning,” Fetch A Friend Rescue, which was caring for the dog who was at an animal hospital, posted on its Facebook page yesterday. “Her extremely frail state could not handle all that occurred within the last week. She put up a good fight and is now free from her pain.”
On October 12th, Mavis had exploratory surgery after a foreign body was discovered in an ultrasound.

Cuse Pit Crew, which originally rescued Mavis and is offering the reward, also handed out flyers Sunday around Rider Avenue in Syracuse, near where the suffering pit bull was found by a Good Samaritan.
Yesterday, in an updated post on its Facebook page, Cuse Pit Crew updated Mavis’ status sharing that “Sweet Mavis passed away this morning, but we’ll continue to advocate for her. Please share.”
This sad case should also create more awareness about the tragic consequences of abuse and neglect of animals.

“So, if you see something, say something,” said Stephanie Heath, Cuse Pit Crew founder.
Anyone with information about Mavis and her former abuser, or any other tips of suspected animal abuse, should contact the Cuse Pit Crew at (315) 442-5336 or email cusepitcrew@gmail.com. Irrawaddy Dolphins in Myanmar. CREDIT: WCS
Working in collaboration with Myanmar’s Department of Fisheries (DoF), Wildlife Conservation Society (WCS) has announced the creation of a new protected area for a population of critically endangered Irrawaddy dolphins living in the Ayeyawady River of central Myanmar.
Sadly, earlier this year, conservationists counted a total of 76 Irrawaddy dolphins living in the Ayeyawady River between the river towns of Mandalay and Bhamo.
The new 100-kilometer (62 mile) zone will serve as an extension to an existing protected area established in 2005 between the towns of Mingun and Kyauk Myaung in collaboration between DoF and WCS.
“Establishment of the new Ayeyawady Dolphin Protected Area demonstrates the significant commitment of the Myanmar Government to conserve this charismatic species of the Ayeyawady River,” Saw Htun, Deputy Country Program Director, WCS Myanmar Program said in a statement. “WCS will collaborate with all stakeholders on coordinated efforts to save the threatened Irrawaddy dolphins in existing and new protected areas.”
To establish the new protected area, DoF and WCS consulted with over 50 villages along the river. Based on those meetings the protected area status was agreed for a 100 kilometer stretch of the river from Male to Shwegu, with a further 100 kilometers designated as a less restrictive buffer area.
Within the new protected area, use and size of gillnets are restricted to prevent dolphins from getting entangled, sometimes drowning. In addition, other methods like electric fishing and the use of dynamite and gold mining are strictly prohibited along with damage of habitat such as sandbars, grasslands, and vegetation. 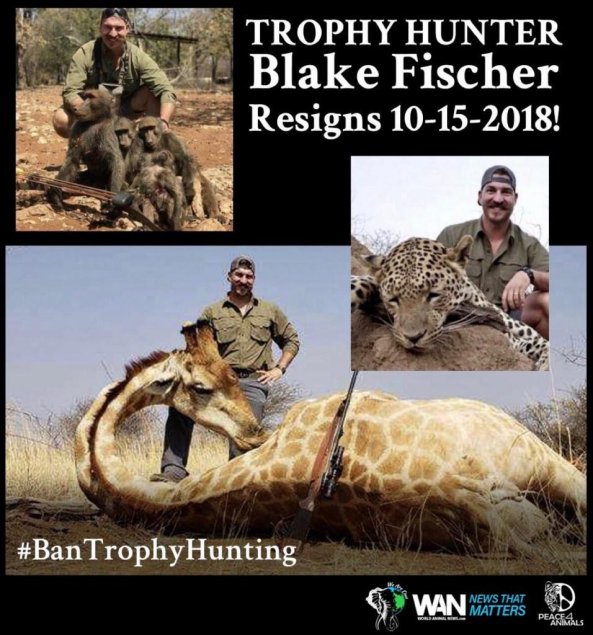 Breaking News! Idaho Fish and Game Commissioner, Blake Fischer, resigned yesterday after receiving worldwide backlash after sharing photos of himself posing with a baboon family and other endangered animals, that he killed for so-called “sport” while trophy hunting in Africa.
Reports stated that Governor of Idaho, C.L. Otter, requested Fischer’s resignation, noting that “every member of my administration is expected to exercise good judgment. Commissioner Fischer did not.”
Fischer’s resignation is effective immediately.
Thank you to everyone who fought hard for his removal. Let’s keep fighting to #BanTrophyHunting Worldwide! 🙏