Post-Traumatic Stress Disorder or PTSD, is a mental health issue that causes the victim of it to suffer from severe anxiety, unwanted flashbacks, and haunting dreams. According to statistics, the invisible illness, PTSD affects around 7.7 million of American adults. And most of the people who can share how it is like to battle against PTSD are the honorable men of the U.S. army.

One of them is a US veteran who served the army for 16 years, Erick Scott. With Erick Scott’s physical demeanor, you can already tell that he is a strong man. And the ink tattooed on his skin: a skull, an empty combat boots, a memorial of the time he served in Iraq, and a soldier’s cross to remember his fallen comrades, symbolizes how honorable Erick is.

However, what the public eyes fail to see, is his battle against his inner demons triggered by his Post-Traumatic Stress Disorder.

Erick recalled about the one advise his father, the person he respected the most, gave him that he cannot forget. “Son, you’ve got eleven guys, he said make sure you bring them all back.” 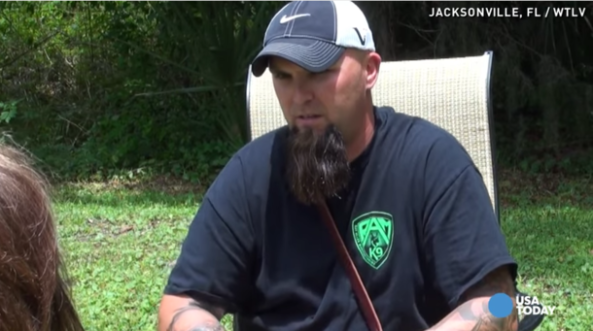 Sadly, some of his comrades perished in the battlefield, “That’s the last thing he [Erick’s father] told me… and they didn’t all come back.” Until today, Erick feels responsible for the life of his comrades who were not able to come back alive from their service. This is one of the nightmares haunting him at night, making it hard for him to have a good night sleep.

“I woke up numerous times, hitting my wife for her just laying there or just in a cold sweat,” Erick shared. The nightmare he is experiencing at night, often leaves him breaking in cold-sweat. 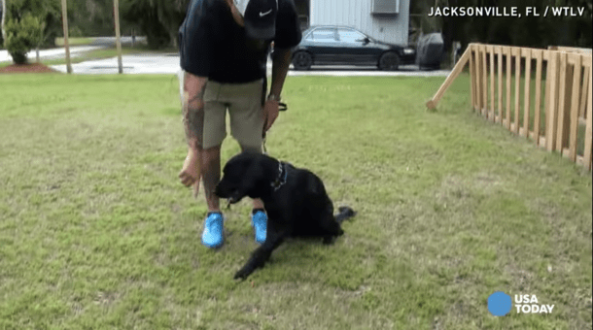 After years of experiencing other symptoms of PTSD, Erick finally decided to seek help from professionals. However, he was in denial and felt angry when he was, indeed, diagnosed with PTSD.

Erick tried a lot of medicines to help him cope with his PTSD, however, nothing worked for him. Hence, all of his drugs and medications were simply thrown in the trash bin. Feeling helpless, Erick already believed that there is no hope for him to recover from PTSD. Fortunately, he heard about the ‘K9’s For Warriors.’

K9s For Warriors, is a charitable organization that aims to help the veterans get the service dog that they need. Each service dog received formal training to respond to the manifestations of PTSD, making them the perfect companion for those suffering from PTSD. Through the help of K9’s For Warriors, Erick met Gumbo, the gentle black labrador who quickly responds to Erick whenever he is having a PTSD attack.

Even when Erick was being interviewed with USA Today, Gumbo did not leave his side. As the retired veteran shared how he reacted with his formal diagnosis with PTSD, the dutiful dog, Gumbo sensed a shift in his mood. In a snap, Gumbo nuzzled his head against Erick’s neck, as if he was re-assuring Erick from his agitation and frustration. As a response, Erick pet Gumbo and was able to relax himself. 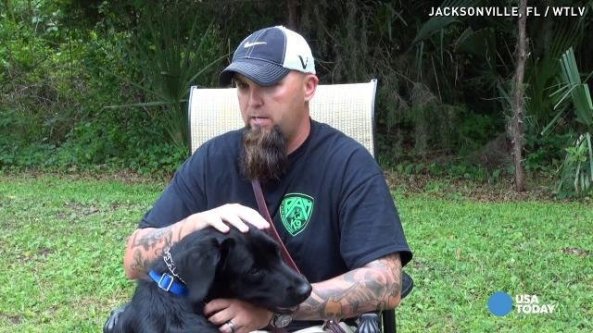 It is truly amazing how Gumbo quickly sensed that there was already something wrong with Erick. His quick and immediate response to calm Erick down, was delivered in a snap that some people did not even notice that Erick was already experiencing a PTSD attack!

Watch the video below and prepare to be blown away by the quick response a service dog, Gumbo, provided to Erick, a veteran who experienced an actual PTSD attack during his interview.