It takes a lot of guts to be a part of the military, you have to be physically fit, mentally stable, and emotionally strong. The time that soldiers spend in the battlefield, away from their family, friends and loved ones surely have an adverse effect on our honorable military men.

In the Vietnam war alone, 15 percent of the Vietnam veterans were diagnosed with PTSD or Post-Traumatic Stress Disorder. PTSD is a mental health disorder acquired after experiencing a traumatic, shocking, scary or dangerous event.

According to the U.S. Department of Veterans Affairs, there are a lot of ways to help one cope up with PTSD. The site advises people with PTSD to consult a psychologist or psychiatrist for professional mental health care. It also encourages people with PTSD to engage in positive activities such as sports to distract themselves with. Another way to overcome PTSD is to surround yourself with a support group and as well as acquiring the help of a service dog.

A 47-year-old veteran named Sgt. Bill Campbell who suffers from PTSD, chose to be assisted by a service dog called Pax. The veteran who also suffers from memory loss, and fear of crowds, was given a yellow Labrador, Pax, to help him cope.
According to the veteran, Pax has been a great help especially when he’s having an episode of PTSD. Without the yellow Labrador, he would have a lot of difficulties. Hence, Sgt. Bill was really interested to meet the trainer who nurtured Pax with the skills he has today.

Wanting to express his gratitude in person, Sgt. Bill reached out to Pax’s trainer, who turned out to be a woman named Laurie Kellog. After learning that Pax used to live at Bedford Hills Correctional Facility, taken care of by a number of female inmates, as a part of the service dog training program, Sgt. Bill made his move.

The veteran traveled to meet Laurie, Pax’s trainer, to express his sincere gratitude for nurturing Pax. There, Sgt. Bill learned that Laurie had taken delight in training Pax to be a PTSD service dog. According to the trainer, she too suffered from PTSD after being a victim of domestic violence.

Laurie admitted that even when Pax was still in training, the dutiful dog had brought her back to live in the present when she was having a PTSD attack. She recalled how the service dog made her feel safe around him. Thus, when she found out that Pax would lend his assistance to a soldier who also suffered from PTSD, she was more than happy.

Laurie was not the only one who was thrilled to be reunited with the dog who changed her life. Evident in the way Pax wagged his tails upon seeing his old trainer, the dog was happy and excited as well. Pax, remembering Laurie, wasted no time and ran right up to her, showering her with lots of kisses! 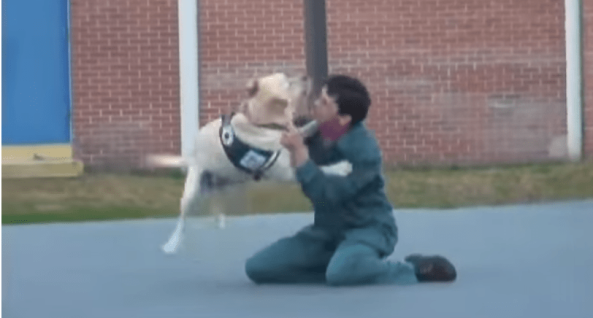 With both of them understanding how it feels like to have a PTSD, Laurie, and Sgt. Bill greeted each other with an embrace. Pax also had the best moment of his life when his former and present owners, bonded with each other.

True enough, any baggage carried by more than one person, gets lighter and easier to carry. Fortunately for us humans, we have our pawed pals to entrust our life and share our problems with! Indeed, dogs are man’s best friend!

Watch the heartwarming reunion between Pax and his inmate trainer Laurie that will surely pull strings to your heart.