Over the summer, the U.S. Fish and Wildlife Service (USFWS) decided to strip Yellowstone grizzly bears of Endangered Species Act protections, sparking condemnation from conservationists over the agency’s “flawed” ruling.

But now, USFWS is reviewing this decision thanks to an appeals court ruling that restored protections for a completely different animal that was taken off the endangered species list: the Great Lakes gray wolf.

In August, the U.S. Circuit Court of Appeals in Washington, DC, ruled unanimously that USFWS was wrong in its 2011 decision to de-list the Great Lakes gray wolf and should remain under federal protection. The three-judge panel wrote then, “The Endangered Species Act’s text requires the Service, when reviewing and redetermining the status of a species, to look at the whole picture of the listed species, not just a segment of it.”

As it happens, the Fish and Wildlife Service used a similar method to de-list Yellowstone-area bears. Kelly Nokes, large carnivore advocate for WildEarth Guardians, explained to Reuters, U.S. wildlife managers removed the bears from federal protections without assessing impacts on other grizzly populations in the lower 48 states.

The Yellowstone grizzly bear has long been considered endangered, with as few as 136 bears in 1975. But in June, Interior Sec. Ryan Zinke announced that the population had been recovered to the point where federal protections can be removed and overall management can be returned to the states and tribes.

There are an estimated 700 today, which “meets all the criteria for delisting,” the Department of Interior, which oversees USFWS, said.

The Associated Press reported that USFWS has now opened up a public comment session on the implications of leaving the bears unprotected. While the review is pending, the animals will stay under state jurisdiction and off the threatened species list, agency spokesman Steve Segin said. The agency plans to release its conclusions by March 31.

Conservation groups responded with fierce outcry over the government’s decision to de-list the grizzlies this summer.

“Without continued Endangered Species Act protections, the recovery of grizzly bears in Greater Yellowstone is in serious jeopardy,” said Bonnie Rice, Greater Yellowstone senior representative with Sierra Club’s Our Wild America campaign. “Inadequate requirements to protect and connect Yellowstone grizzlies to other populations and hostile state management policies will mean fewer bears restricted to an even smaller area. Grizzly bears will be killed through trophy hunts on the doorstep of Yellowstone and Grand Teton National Parks instead of inspiring millions who come to the region just for a chance to see a live grizzly bear in the wild.”

“These iconic bears need to be protected, not gunned down so their heads can go on some trophy hunter’s wall,” said Andrea Santarsiere, a senior attorney with the Center for Biological Diversity. “Facing ongoing threats and occupying less than five percent of their historic range, grizzly bears are nowhere near recovery and continue to need the strong protections of the Endangered Species Act.” 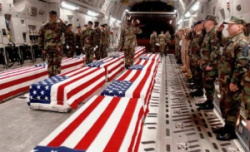 {Drape The Flag Over My Casket}

But they’ll be handing you my flag…

As we cross the 100,000 signature threshold, we want to say THANK YOU for taking time to sign the petition asking the courts to reconsider the order to have her destroyed. Destroyed. That’s the legal term for putting a dog to death and it makes your blood run cold.

At any moment, the Municipal Court judge in Dallas is going to announce a new date/time for a hearing on Lamby which will decide whether she dies or can have a second chance at life with a rescue group or in a sanctuary. The attorneys – who are working pro bono — have said they expect a bond to be required by the court in the amount of $2,000 to $5,000 in addition to court filing fees.

Please help with this next stage of this challenge by contributing to Lamby’s 2nd Chance Fund at https://www.gofundme.com/lamb-of-gods-2nd-chance-fund.

If only 8% of your donated a single $1, we could ensure the funds are available to help Lamby at this critical time!

Once this case is over, any monies not applied to expenses and Lamby’s welfare will be contributed to worthwhile rescue groups and charities that are helping dogs recover from abuse.

BACKGROUND: Lamb of God (Lamby) is a mixed-breed female dog that has been used as a prop by an aggressive panhandler in the Dallas entertainment districts. Lamby was forced to wear comical hats and glasses that cut deep into her fur by rubber bands while she was restrained within a little milk crate that was strapped to a bicycle’s handlebars and forced to pose for photos in exchange for money that went into the pockets of the panhandler. Witnesses have seen the panhandler feed Lamby candy instead of a proper diet and he had an astounding 16 warrants for his arrest. For months, citizens in these entertainment districts have called law enforcement and Dallas Animal Rescue to help get the dog out of her abusive situation.