SAV Comment – Glad to hear the rabbit is ok. 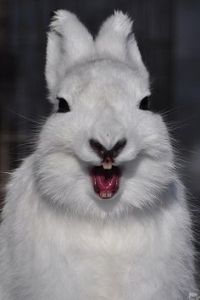 I read this report on a German web site for animal rights and translated it.

ST.PETER AM HART, AUSTRIA: At around 11:05 am on Saturday, 21 October, at the end of a so-called ‘drive-hunting’, the participants of a hunt were in the Mooswiesen area.

An 80-year-old hunter from St. Peter am Hart and a 25-year-old from Altheim were on the same level in the last rifle line.

As a field rabbit ran between the two and fled towards St. Peter, the 25-year-old gave a shot but did not hit.

The 80-year-old, who was to the right of the 25-year-old, shot twice on the rabbit, but missed it as well, and shot by mistake at his colleague!!

The 25-year-old was hit by bullets in his head and legs.