A UK so-called planning firm “One Creative Environments” has proposed the most bizarrely stupid idea for “beautifying” the proposed Westinghouse-Toshiba AP 1000 Nuclear Power Station (Moorside) in Cumbria, UK – fake rainbows over the nuclear site. But, there will be real radioactive rainbows due to the planned radioactive discharges from the nuclear power station, making the fake rainbows as sickening as silly. The uranium might even come from the area of the Grand Canyon, as explained further below.

As Radiation Free Lakeland points out “This isn’t a spoof, wish it was it would be the best ever….” In an embarrassment to the concept of planning in general and British Town and Country planning in particular the “plan” calls for “two large glass towers that would use light and mist to create a continual arching rainbow over the site….” See image and more here: https://mariannewildart.wordpress.com/2017/07/27/nuclear-power-farts-rainbows-official/

If you live in the state of Pennsylvania like I do, put a reminder on your calendar! You should check to see if you’re in the 10 “AIR” Mile Zone

The Democratic governor’s administration will be handing out free potassium iodide on Aug. 24 as part of an annual effort to replace expired tablets. The Wilkes-Barre Citizens’ Voice reports (http://bit.ly/2w6uokN ) the medication blocks the uptake of radioactive iodide.

In Luzerne County, there are 19 municipalities that are within or partially within the 10-mile radius of the plant. Wolf says residents who live within 10 miles of any of the state’s five nuclear power plants should… 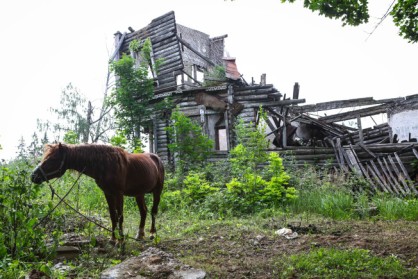 Simply offering a horse for sale is no guarantee of finding a suitable home for that animal,  even if young and sound.  The process is even more challenging if the horse is older, untrained, or has behavioural or physical issues, or if the economy is poor.  While most shelters and rescues are likely at capacity,  a study conducted by the Research and Development/Community Outreach arm of the ASPCA found that there do appear to be untapped resources that could be called upon to re-home horses within the general public.

The question posed by the study is whether there are enough private homes to accommodate the number of unwanted American horses currently being sent to slaughter.  Using Edge Research to conduct a telephone survey, the researchers attempted to pre-qualify people who would be willing to adopt unwanted horses, determine what characteristics were required of horses to be…

Nichols and Harris pleaded guilty to indictments. Gaines, Cuellar, and Atkinson were charged with Bills of Information. Charges remain pending against four defendants.

According to court documents filed in connection with the cases, from October 2015 through June 1, 2016, the pleading defendants and their co-defendants and associates fought dogs – including to the death – and trafficked in dogs with other dog fighters in Indiana, Illinois, New Mexico, and elsewhere so that those dogs could be used in dog fights. They also maintained fighting dogs and dog fighting equipment such as dog treadmills, intravenous drug bags and lines, “breeding stands” used to immobilize female dogs, and chains weighing up to several pounds per linear foot. Agents found canine blood on the floor, walls, and ceiling of the basement of one defendant’s residence, indicating that the area was likely used as a dog fighting pit. Among other acts involved in the charges, one of the pleading defendants admitted that his dog died in his car on the way home after losing a dog fight.

“Justice is being delivered in these cases,” said Acting Assistant Attorney General Wood. “Ending animal fighting ventures and other inhumane practices depends upon the hard work of investigators and lawyers like those who brought these cases, and will also require continued partnership with federal, state, and local law enforcement agencies. Our Division is proud to be a leader in this worthy cause. We also applaud the work of the Humane Society in partnering with us to provide hope of recovery for the abused animals.”

“The criminal conduct speaks to the cruel conditions in which these animals live,” Acting U.S. Attorney Fitzpatrick said. “This office, along with our law enforcement partners and the Humane Society, is working to end this illegal activity and punish those who abuse animals for their own enjoyment.”

“The provisions of the Animal Welfare Act were designed to protect animals from being used in illegal fighting ventures, which often entail other forms of criminal activity involving drugs, firearms and gambling,” said Special Agent-in-Charge Bethanne M. Dinkins of the U.S. Department of Agriculture’s Office of Inspector General. “Together with the Department of Justice, animal fighting is an investigative priority for USDA-OIG, and we will work with our law enforcement partners to investigate and assist in the criminal prosecution of those who participate in animal fighting ventures.”

This case is part of Operation Grand Champion, a coordinated effort across numerous federal judicial districts to combat organized dog fighting. The phrase “Grand Champion” is used by dog fighters to refer to a dog with more than five dog fighting “victories.” To date, 98 dogs have been rescued as part of Operation Grand Champion, and either surrendered or forfeited to the government. The Humane Society of the United States assisted with the care of the dogs seized by federal law enforcement. The government is represented by Trial Attorney Ethan Eddy of the Justice Department’s Environmental Crimes Section, and Assistant U.S. Attorney Kathleen O’Leary. The case is being investigated by the U.S. Department of Agriculture – Office of Inspector General, the U.S. Department of Homeland Security – Homeland Security Investigations, and the Federal Bureau of Investigation.