You really need to go over and watch these videos! But I warn you, they are addictive 🐼

We feature a surprise address by Senator Bernie Sanders outside the White House on Tuesday during a global day of action against the Dakota Access pipeline that included demonstrations in over 300 cities. “Today we are saying it is time for a new approach to the Native American people, not to run a pipeline through their land,” Sanders said, demanding that their sovereign rights be honored. He also spoke about the need for politicians to protect access to clean water, recognize that climate change is real, and support an aggressive shift away from fossil fuels to sustainable energy sources.

Prepare for another ISIS(tm) false flag attack where a truck mows down people! And you can prepare for that, rather than prevent it, because the New York Post once again failed in it’s journalistic duty, even while licking it’s wounds after the “Trump disaster.”How did they fail? By not telling us ANYTHING about ISIS, and who ISIS really represents.
It is not going to do any good for restoring credibility, if they fail to tell you that ISIS is a home grown, Hillary launched enterprise that America bought and paid for by funds issued straight from your tax dollars, by the U.S. secretary of state herself – Hillary Clinton. I doubt my regular readers are unaware of this, but let me humor the casual passer by with…

President-elect Donald Trump has captured the White House, but he may have to wait a while to ensconce himself inside the Oval Office.
Former George W. Bush advisor Karl Rove said Wednesday that major security upgrades are planned for the ceremonial office and seat of presidential power – and that it could put the office out of commission for up to a year.
If that occurs, he said, President Trump might have to spend up to a quarter of his term working out of the Eisenhower Executive Office Building across the street – where President Richard Nixon labored and made some of his infamous White House recordings.
‘My understanding is that for the first year of his time in office, President Trump… 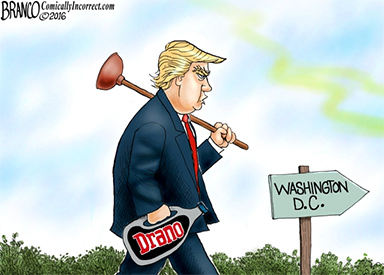 We’ve been hearing about violent mob attacks taking place against random citizens for years now. In Europe, a wave of crimes committed by Muslim migrants has been quietly swept under the rug by the press. Negative reporting about migrants has been avoided in liberal European countries, with the official narrative being that they are a net positive.

Meanwhile on the streets, the results of the uncontrolled migrant crisis are impossible to ignore.

Anders Vendel got a recent reminder when the Sweden native was assaulted for being in the wrong place at the wrong time – and having the wrong hair color.

n a social media post that was quickly removed after the story went global, Vendel described how he was viciously beaten by an angry mob while he was waiting for a meal in a fast food restaurant. His crime? Having wild blond hair that looked a…

Milwaukee County Sheriff David Clarke has unleashed a series of tweets calling for a “state of emergency” to be declared and for the ongoing anti-Trump protests to be violently “quelled” by the military.

The significance of this rant is relatively plain. This is a proposal for the imposition of martial law and the complete lockdown of American cities in which anti-Trump protests continue to take place. Clarke’s language recalls the extraordinary Boston lockdown of 2013, in which the population was ordered to “shelter in place” while militarized police units conducted house-to-house searches. Curfews were also used as part of efforts to suppress the protests against police brutality in Ferguson, Missouri in…

The smoke here in Atlanta has been surreal — Meteorologist Stu Ostro

It’s a script that reads like something from the pages of a dystopian sci-fi novel:

Meanwhile, strange, out-of-season wildfires continued to burn from the U.S. South to North Dakota and New England. In Atlanta, smoke streaming out of nearby wildfires blanketed the city. Red-eyed residents were increasingly forced to don protective masks beneath the choking late-fall pallor. In Chattanooga, over 200 residents were hospitalized from smoke inhalation and shortness of breath.

(NASA satellite image of smoke streaming out from Appalachian wildfires on November 16, 2016. Note that smoke plume stretches over…

Summit County Citizens Voice Staff Report:  “Conservation groups are challenging the Bureau of Land Management’s plans to auction fossil fuel leases on 20,000 acres of public land in Colorado based on concerns about air and water pollution, and potential harm to imperiled species ­— including threatened Colorado River fish such as the Colorado pikeminnow and razorback sucker, and plant species such as the parachute beardtongue.

“The administrative protest also says the BLM failed to consider climate impacts. If the leases are developed, it could result in 31. million tons of greenhouse gas emissions.

“It’s irresponsible for the BLM to issue new fossil fuel leases on public lands without considering the impact that extracting and burning these new sources of dirty energy will have on the climate,” said Diana…

President elect-Donald Trump should add to his agenda of things to do:  ARREST GEORGE SOROS for inciting riots in the United States and war crimes.