Jul 4, 2016 — When Culpeper County, Virginia student Brynnan Grimes found out she had to skin and cut up a cat as part of a human anatomy class, she took her protest of the antiquated teaching method seriously.

“We were told ‘If you have a black cat at home, select a white cat to dissect or vice versa.’ I was appalled. Like the color of the cat’s fur matters to me!”

Brynnan went home and shared the news with her mother, chained-dog activist and founder of Dogs Deserve Better, Tamira Thayne. They spent many hours that week discussing their options, both for Brynnan and for a way to put an end to cat dissection in her school district and across America.

“We believed most Americans aren’t aware of it, and we couldn’t help but think if there was a way to reach these people, cat dissection could end in all but vet training and technician programs.

“My mother e-mailed the teacher with her concerns, but failed to receive a response. At that point I decided to homeschool in protest of the school’s policy of cat dissection and their decision to ignore the concerns of the students.”

What the daughter-mother duo did next ultimately won the teen First Prize in the National Voice for Animals contest, in the Active Involvement by a 16-18 year old category. 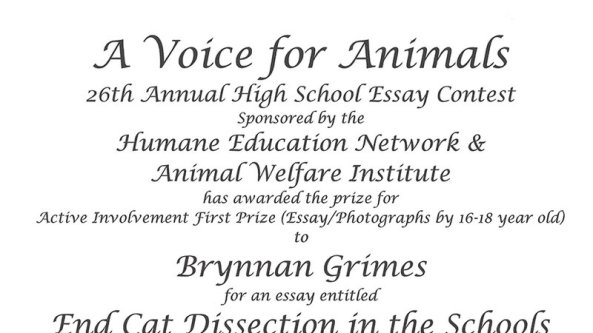 “One student homeschooling wasn’t enough—that one student’s protest needed to turn into awareness for the masses. My mother and I decided to put up a petition to publicize the cat dissection occurring in Culpeper High School. We asked people to sign it to let the school officials in Virginia—and hopefully nationwide—know that we weren’t the only ones opposed to dissecting our companion animals in the classroom.”

“I was interviewed for over an hour by Channel 29, an NBC affiliate in Charlottesville, VA. The interview resulted in a two minute segment that aired twice in the regional viewing area, and is still available online at nbc29.com. I also did a newspaper interview with the Culpeper Star Exponent, which was printed in newpapers in Richmond, Fredericksburg, and Roanoke too. Overall, the story of our petition and our efforts to end cat dissection in the Culpeper County Virginia School District was carried in 12 different online news outlets, in addition to TV and hardcopy newspapers.

School official Rob Hauman, executive director of curriculum for Culpeper County Schools said, “The recent attention to this issue of dissection may impact discussions within our school division, the region, and perhaps across the state.” (Culpeper)

In the end, one student’s distress over a school mandate that borders on cruelty to both students and cats has spread to millions of people reading about the ongoing issue of cat dissection in the classroom. Our petition currently has over 108,000 signatures, and I will continue to raise awareness for the suffering of our companion animals and the students who are forced to cut them open or appear as cowards for not doing so. I remain hopeful that our efforts have made a difference on their behalf.”

Congratulations to Brynnan Grimes for her hard work for the voiceless, and for her First Place Award in the Voice for Animals contest!

Would you please share this petition one more time to garner more signatures before the start of the next school year?

Let’s make our voices heard ONCE AGAIN, for the cats who have none. Thank you!

P.S. Check out the link for all the contest winners, and to read and share Brynnan’s essay as well.

Jul 4, 2016 — I hope you all enjoy the festivities today, whether with your family, friends, colleagues, or furry babies. Remember what today is all about: freedom.

We are very close to reaching our next milestone: 200,000 signatures! The more we sign and share, the more people we can reach who need to hear our message: freedom is freedom, for all.

To the ones who have signed multiple times, THANK YOU!

Wherever you are today, be safe, happy, and joyful. Good things are coming.

Sometimes at Grist HQ, we ask ourselves things like: “Just how miserable will the Fourth of July be in 2100?”

But really, our summers are hot and getting hotter. Just ask the founding fathers: On July 4, 1776, Thomas Jefferson dressed and bewigged himself for a long day of declaration-adopting in a relatively pleasant 76 degrees — good news for the thirteen waistcoat-clad dudes in the stuffy halls of Philadelphia’s State House.

Fast-forward 240 years. This Fourth of July, the temperature in Philly is forecast at a sticky 85 degrees. And by the end of the century, fireworks over the Benjamin Franklin Parkway could take place in 90-degree weather.

Mandatory disclaimer: Weather and climate aren’t necessarily the same thing (watch Neil deGrasse Tyson eloquently elaborate while walking a dog) — but they both follow a trend. Out of the past 16 years, 15 have been among the warmest in recorded history in the U.S. If current emissions trends persist, scientists warn, average temperatures in the U.S. could rise another 10 degrees F by 2100.

So as we throw some ‘dogs on the grill this Monday (or maybe not), we’ll be thinking about how, on a July 4 afternoon 80 years from now, the sun could be the grill and the wieners could be us.
© 1999-2016 Grist Magazine, Inc. All rights reserved. Grist is powered by WordPress.com VIP.