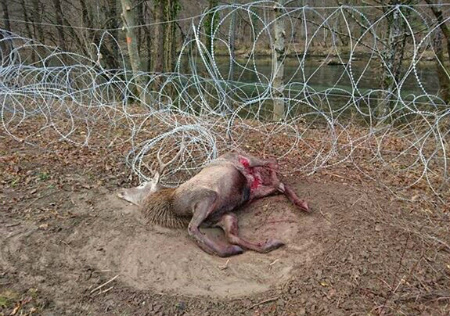 This photo shows a red deer, which died a horrible death by one of the bloody barbed wire fences, erected by stupid racist anti-refugee politicians like Orban in Hungary.

“Border barriers are the new Iron Curtain for wildlife”

The border fences in Europe for stopping refugees are disastrous for wildlife. A group of international scientists are worried about the impact on the migratory routes of, eg, wolves, bears, lynx, bison and red deer.

“The fences cut populations of already vulnerable species in pieces,” says Arie Trouwborst of Tilburg University. “And at least as bad is that animals that get caught in the fences die in a nasty way. Especially barbed wire which was rolled out recently in haste causes animal suffering.” …

The group estimates that there are border barriers with a length…

Actor Justin Long will break your heart as he speaks for Charlie in this true and unfortunately very common story of a neglected ‘backyard dog.’

Leave the honey, royal jelly, and beeswax on the shelf. Vegan products can do all the same things while giving busy bees a break.

Source: Is It OK to Eat Honey, Royal Jelly, and Bee Pollen?

So many options, so little time. Yum!

Source: Vegan Ice Cream Flavors to Cool You Down This Summer

All-over-it dog lovers know the basics of keeping dogs safe in summer: Bring lots of water with you on walks, watch for the signs of your dog overheating and never, ever, ever leave a dog in the car — even on days that don’t seem that warm.

But it might come as a surprise to even the most type-A pup owners that the very pavement beneath your dog’s paws could be sizzling hot. And hot pavement can have gruesome and painful consequences.

“Asphalt gets very hot and can burn your pet’s paws, so walk your dog on the grass if possible,” the Humane Society of the United States (HSUS) urged. But sometimes it can be hard to tell.

Luckily, there’s a quick and easy test, courtesy of Moon Valley Canine Training, to see if the street temperature is safe enough for a walk with your dog. Put the back of your hand on the pavement, and if you can’t keep it there for five seconds, it’s too hot for your pup’s feet.

If the pavement fails the test, walk your dog when the temperature drops a bit (if he can wait) or stay on the grass. If walking your dog on hot pavement is unavoidable, there are things you can do to be prepared, like using special dog booties or dog paw wax designed to protect your dog’s sensitive paw pads from the heat.

ORLANDO, FL – JUNE 18: Newly installed signs warn of alligators and snakes on a closed section of beach following the death of a 2-year-old boy who was killed by an alligator near a Walt Disney World hotel on June 18, 2016 in Orlando, Florida. Lane Graves, who was visiting Disney World with his family from Nebraska, died after he was pulled into the lagoon by an alligator on Tuesday. (Photo by Spencer Platt/Getty Images)

ORLANDO, FL – JUNE 18: Newly installed signs warn of alligators and snakes on a closed section of beach following the death of a 2-year-old boy who was killed by an alligator near a Walt Disney World hotel on June 18, 2016 in Orlando, Florida. Lane Graves, who was visiting Disney World with his family from Nebraska, died after he was pulled into the lagoon by an alligator on Tuesday. (Photo by Spencer Platt/Getty Images)

Walt Disney World reopened its beaches to guests Thursday, a source at the Florida theme park with knowledge of the situation told CNN.

The move comes more than a week after an alligator snatched a boy, Lane Graves, from a beach behind the Grand Floridian Resort & Spa, killing him.

The beaches will open one hour after sunrise and will close an hour before sunset, the source said. (The alligator attacked the Nebraska 2-year-old shortly after 9 p.m. on June 14.)

Beaches also will include signs and temporary barriers “to further promote safety at our resort and we continue to work on permanent, long-term solutions,” the source said.

On Tuesday, the Florida Fish and Wildlife Conservation Commission announced that it was no longer hunting alligators in the Seven Seas Lagoon where Lane was killed.

“The FWC is confident that the alligator responsible for the attack has been removed,” the commission said in news release. “The conclusion took into account the proximity to the attack site of removed alligators and witness descriptions.”

Following Lane’s death, the FWC began monitoring the waters and trapping gators in hopes of finding the reptile responsible or eradicating the area of all alligators matching the witnesses’ descriptions.

Past experience dictates that the alligator responsible would have remained near the site of the attack, and trappers located two alligators “in close proximity to the incident location,” the statement said. Commission experts concluded that both animals were capable of inflicting the wounds that Lane suffered.

Attempts to confirm via DNA analysis were unsuccessful because Lane’s wounds tested negative for animal DNA and no comparison could be made, the commission said in its statements.

“During the investigation, trappers humanely removed six alligators from the area,” the statement said. “Round-the-clock monitoring and trapping efforts have not produced alligators of the size capable of the attack since June 16.”

Since the attack on Lane, a debate has raged over whether Disney should eradicate alligators at its resorts and over whether there should have been better signage at the beach where the boy was taken.

While experts agree the former is an impossibility — given alligators’ mobility and the vast acreage of water on Disney property — the latter poses an interesting argument.

The latter poses an interesting argument. Roughly a 10-minute walk from the Grand Floridian, at a vacation center for the U.S. military called Shades of Green Resort, there was a small pond next to a golf course. There, a sign warns visitors to stay away from alligators.

Adjacent to the Grand Floridian was another beach with a sign warning visitors not to swim. It also says, “Please do not feed the wildlife. Feeding changes their natural behavior and may be harmful to their health.”

Yet while the signs at the Grand Floridian warned visitors against swimming, there was no mention of wildlife, let alone alligators. A senior Disney source told CNN that that would be changing, and alligator warnings will be posted on all resort waterways.

Disney shut several beaches at its resorts following the attack. Signs were posted, and security guards asked visitors to remain on nearby sidewalks.

In “Honeybees as Monitors of Low Levels of Radioactivity” Simmons et. al.(1990) state that”it is known that honeybees can be used to detect radionuclides present in the environment. Their mobility and their ability to integrate all exposure pathways (i.e., water, air, vegetation, and soil) could expand and add another level of confidence to the present monitoring program.” (This study was for the US DOE at Hanford Nuclear Site) [1]

In “Radioactive Bees–Honey Bees as Indicators of Radionuclide Contamination“, Timothy K. Haarmann of Los Alamos National Lab says that his experiments at LANL “verify that honey bees are indeed good indicators of radionuclide contamination when it is present in the environment“. [2]