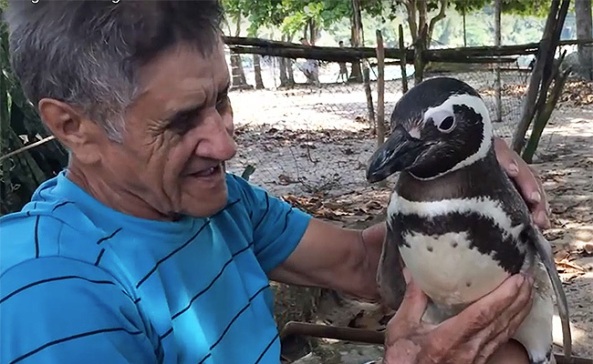 How far would you swim to reunite with the person who saved your life? For one penguin who found himself in a sticky situation (literally), the answer is approximately 5,000 miles.

Have you heard about the Magellanic Penguin and retired bricklayer in Brazil who have struck up a unique friendship?

Joao Pereira de Souza lives in a fishing village just outside Rio de Janeiro, Brazil. In 2011 he found a tiny penguin lying on some rocks at his local beach. The creature was covered in oil and close to death.

Joao cleaned the penguin, nursed him back to health, and named him Dindim. Joao tried releasing the penguin, presumably never to meet again, but Dindim wasn’t ready to leave just yet. Joao recalls, “He stayed with me for 11 months and then, just after he changed his coat with new feathers, he disappeared.”

But that was not the last…

2 comments on “Penguin Travels 5,000 Miles to Hang Out With Rescuer | Care2 Causes”