Stella has spent the last two years locked in a 3-by-9 foot cage in a kennel in Devon, England. She has never been let out to exercise or play.

In 2014, Stella was taken away by police from her owner, Antony Hastie, because she was “potentially dangerous.” Did she bite or attack someone? No. Under the UK’s Dangerous Dogs Act 1991, Stella is illegal and considered a threat to public safety – but only because of her breed. Stella is a pit bull mix.

Stella was taken to a private kennel owned by Devon and Cornwall Police. She was put in a cage that she has only been allowed to leave twice in the past two years, and only for behavior assessments.

“We were always told not to exercise or go into a kennel with any dogs, regardless of character, that had been brought in under the Dangerous Dogs Act,” Laura Khanlarian, who…

The specter of death hovers over the world’s first national park. Approximately 150 wild bison have been rounded up within the boundaries of their ostensible refuge, Yellowstone National Park, and are being held in a capture facility–also located within park boundaries. They number among those who will be killed and those already killed this season–as many as 900–and they’re slated for shipment to slaughter–perhaps as soon as the week of March 7th. However, before they make that final migration, they’ll be further terrorized. Watch what transpires (see video) when these massive, wild animals of wide open spaces are confined in small capture pens and squeeze chutes: witness their terror; see how they injure themselves and their herd mates–observe the…

Cats are being recognized more and more for their ability to help humans whether in nursing homes as therapy cats or by helping kids learn to read. Science has also caught up with what cat lovers already know – that on top of companionship cats provide us with many health benefits. When it comes to providing comfort or stress relief cats are masters at it and we often don’t even realize they are working their magic on us. In the UK Barney the cemetery cat is once such feline who has worked his healing magic on people for 20 years. 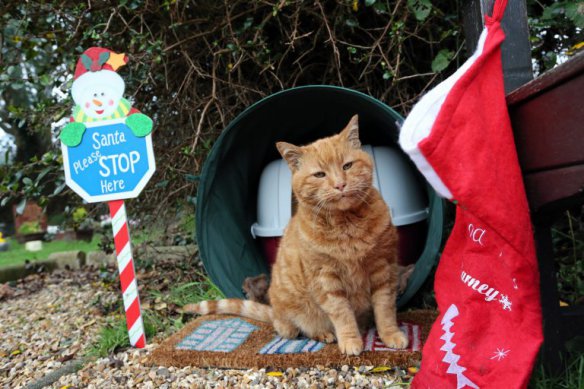 Barney, who had been at the cemetery since he was a kitten, originally lived next store with his owners, but after they moved away the ginger…

Hawkeye, at the funeral of his master, Navy SEAL Jon Tumilson.
credit: therattingtonpost.blogspot.com

And now these three remain: faith, hope and love. But the greatest of these is love. 1 Corinthians 13:13.

Do animals, particularly dogs, go to heaven?It’s a vexing question, and because the mind of God is ineffable, there can be no absolute answer, but there is faith, hope and love, as Joshua Rogers expressed at Fox News. At the age of 10, Rogers saw his dog run over and killed: