This Ongoing Saga post is usually updated daily. Most recent updates are on top, after images, and comment info, so that daily readers will not have to scroll-down far. Time is UTC-GMT. This is a continuation of:
https://miningawareness.wordpress.com/2015/09/01/the-ongoing-saga-60-news-updates-tidbits-trivia/

Please take the time to make a comment Before the deadline This is too important! Thank you.

Around Half of the Radioactive iodine 129, half-life 15.7 million years, emitted by the nuclear facilities of Sellafield (UK) and La Hague (France), is estimated to end up in the Arctic. Now you see how. (See more at the bottom of the post). Nuclear power emits deadly radionuclides during the entire fuel chain. Nuclear reactors legally leak radiation. When they have accidents, they leak even more. Much nuclear waste is also allowed to leak. Some will end up in the Arctic.

“Year: 2005
From collection: Barentswatch Atlas
Author: GRID-Arendal
Description:
The pollution from industrialized nations are affecting the environment in the Arctic region. The main areas of industrial activity in the northern hemisphere are spreading to specific areas in the Arctic though air currents“… 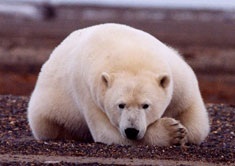 US Fisheries and Wildlife Service (USFWS)
“polar bears and every other living thing are all part of Earth’s living system. If that system changes so that it is no longer friendly to polar bears, then it may not be friendly to many other species, including humans. So we need to look at the polar bears’ problems as a warning for ourselves.” http://oceanservice.noaa.gov/education/projects/wherepolarbears.pdf

The US Fisheries and Wildlife Service (USFWS) has a draft Polar Bear Conservation plan. There are only an estimated 22 to 25 thousand polar bears alive, worldwide, compared to 7.3 billion people. While the plan discusses some other toxins found in arctic water, it fails to discuss the impact of radionuclides on polar bears, even though radionuclides are present in the arctic (see below), and continue to accumulate from routine and accidental releases from nuclear reactors, nuclear fuel reprocessing facilities, etc. Radionuclides are…