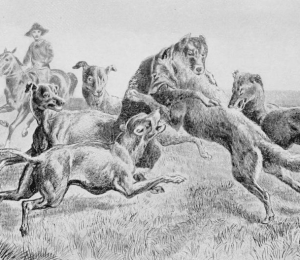 Replace the hounder on the horse with a hounder in a pickup and this is Wisconsin.

Teddy Roosevelt did it. So did General George Armstrong Custer. Now over 100 years later, a few Wisconsin hunters can say they’ve hunted wolves using dogs too.

“Jay, Jake and their friends have a reputation of working hard and playing hard. That also includes taking their hunting and the care of their dogs seriously. They simply wouldn’t put their dogs in a situation where there’s a strong possibility they could be killed or injured. As Jay says, “there are risks when my kids play football too, but it’s a risk I accept.”

The above paragraphs are a prime example of what you are about to read and see in a disgusting fluff piece written for a propaganda laced kill everything website called “Petersen’s Hunting.” The website is half advertisement of the latest killing implements for the…