“I am truly concerned by the fact the DNR is becoming a fostering institution for psychopaths. The DNR in the state of Wisconsin is a complete shame.” ~ Maria Horn, citizen communication to Wisconsin Department of Natural Resources

This is wolves’ last stand.

To protect wolves, please contact your federal representative and senator now (202-224-3121) to urge them NOT to support legislation or riders that:

A mare/foal pair in the sale program because they were offered 3 times on the Internet adoption
https://www.blm.gov/adoptahorse/horse.php?horse_id=7175
by Grandma Gregg
Remember when we saw how the BLM was posting lots and lots of wild burros online in order to get them 3-strikes fast so they could sell them to Guatemala?   Recently, and now, the BLM is running our wild horses (and burros!) through the same way – like used cars – and are advertising them for sale on the internet.  (A few links and pics attached, but there are many more online – see the links – and a “new” internet adoption is starting in a few days.)
The BLM is doing this because they can’t use Tom Davis to dispose of horses anymore – so they’re now advertising them to get rid of them as fast as they can, and as I know from personal experience ……

Of Dogs and Chains and the Intersection of the Two

I saw “Selma” on Friday, the story of Martin Luther King Jr.’s (and so many others) march on Selma, Alabama which was a turning point in the fight for racial equality in America.

As I sat in the dark theater watching whites beat blacks to death and employ German Shepherds as attack dogs to cause them even more fear and pain, I sobbed for the cruelty that humanity is capable of. I asked myself (as I seem to do so much lately), “Why? Why? Why? I just don’t understand.” 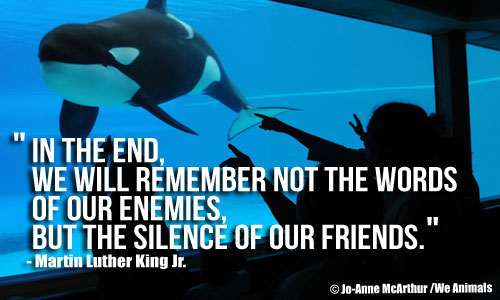 Growing up, I was always taught in school not to discriminate against people based on their gender, ethnicity, class, or sexual orientation. We’re pretty much all raised with those values, right? Well, as I got older and entered adulthood, I started to realize that the same should apply to animals—who suffer greatly.

Today, countless animals face a fate similar to that of humans who were forced into slavery and subjected to other injustices: They’re tortured, abused, and neglected—just as humans once were, and, unfortunately, sometimes still are. Can you believe that over 63 billion animals in the U.S. are slaughtered every year for the food industry? They’re often confined to small stalls or cages and deprived of everything that’s natural and important to them until the day they’re sent to slaughter. How is this fair? In addition to being used for food, animals also suffer at the hands of humans for fashion, experimentation, and entertainment.

Funny and Interesting Stuff People Have Sent Me

Last week, Duke University, in the spirit of inclusiveness and diversity, proudly announced that it would henceforth regularly sound the Muslim call to prayer from the bell tower of its chapel. Duke has been, in recent years, the site of considerable controversy and administrative cowardice. Among those displays was the Duke Lacrosse debacle in which a corrupt prosecutor, abetted by much of the Duke Faculty, the University President and the national and local news media tried to railroad several entirely innocent Lacrosse players for a rape that never occurred. This religious flash in the pan is, however, far more dangerous than anything the feckless Duke Administration has done to date. The Jerusalem Post has the story:

Several Nigerian media outlets have been reporting on local women in the villages of Attagara and Kawuri in Borno State who recently disarmed nearly a dozen Boko Haram terrorists. The notorious pseudo-Islamic terror groups tried to attack the Attagara and Kawuri communities over the weekend but the insurgents were instantly repelled by a group of armed women.
The Attagara and Kawuri villages in Gwoza and Bama Local Government Areas of Borno State resisted the attack using an array of local talismans and, of course, their assault weapons came in handy as well.

Almost immediately, the community rallied round to apprehend the insurgents. At least three of the terrorists managed to flee, but community members say that seven were arrested and executed.
Local residents said that the initial attack happened when the terrorists that the villagers described as Boko Haram came into town on motorcycles. Stories are…

Oprah Winfrey, one of the wealthiest people in the world, is throwing the race card again.

During an interview with the BBC Friday, she not only said that President Obama is treated with disrespect because he’s black, but also that entire generations of racists are going to have to die for racism to end (video follows with transcript and commentary):

The Obama administration shut off the bank accounts of an Indian tribe as part of its Operation Choke Point program, The Daily Caller has learned.

The Otoe-Missouria tribe of Red Rock, Oklahoma reported that it is the latest victim of Operation Choke Point, according to a whistleblower response the tribe sent to the U.S. Consumer Coalition, which was obtained by TheDC.

“Operation Choke Point has negatively impacted our businesses in several key ways, which unfortunately limits our ability to provide services for our people and the surrounding community,” said John Shotton, chairman of the Otoe-Missouria tribe.

“Compassion for animals is intimately connected with goodness of character and it may be confidently asserted that he who is cruel to animals cannot be a good man.”
Arthur Schopenhauer, German Philosopher

I have said this before and will no doubt say it again but what the hell is wrong with people who deliberately harm animals , people who participate in cruelty for pleasure or entertainment?

Please read the following information from PETA and take the suggested action.

“Liquor forced down bulls’ throats, animals made to run while being chased, lassoed, beaten with bats, and stabbed …

NO animal should ever endure such horrific cruelty, yet on February 1, this is exactly what will reportedly happen to the bulls used in the annual Fiesta de la Virgen de la Candelaria in Tlacotalpan, a city in the Mexican state of Veracruz.

And the torture doesn’t end there: After the terrified bulls…

We are happy to be ‘Daily Clickers’ with the Care2 site.

Being a ‘clicker’ enables you to help children, abused women and a host of animals and their environments around the globe.

To become a clicker and to support any of the campaigns, just click on the ‘Click to Donate’ links given below.

You can do this every day for free, as we do.

Our own individual impact on different projects is shown on the right below, alongside the global impact from clickers all over the world.

So come on, join the global group of daily clickers; its free and yet it greatly helps all those in need !!

Algeria concerned Al Qaida or ISIL could be smuggling uranium http://www.worldtribune.com/2015/01/18/algeria-concerned-al-qaida-isil-smuggling-uranium/   CAIRO— Algeria plans to establish a network to monitor the flow of nuclear material along its borders.

Officials said the government has approved a plan to install equipment to inspect incoming goods for radiation. They said the equipment would be installed at border posts amid concern that Al Qaida or Islamic State of Iraq and Levant could be smuggling nuclear or radioactive material through Algeria to such states as Mali and Libya.

They will be deployed at port and airport platforms for the monitoring of all product and equipment, which may introduce polluted materials and possibly may represent a radioactive source,” Algerian customs chief Mohammed Abdul Bouderbala said.

In a briefing on Dec. 22, Bouderbala said border posts would include customs units that specialize in detecting nuclear or radioactive material. He said the units would consist of…