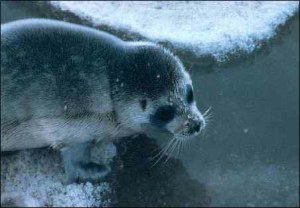 FRISCO — One of the largest-ever critical habitat proposals won’t do anything to slow the decline of Arctic sea ice or halt the buildup of greenhouse gases, but it may give ice-dependent ringed seals a fighting chance to survive the Arctic meltdown.

Ringed seals were listed as threatened under the Endangered Species Act in 2012 in response to a petition from the Center for Biological Diversity. This week, the National Marine Fisheries Service proposed designating 226 million acres (350,000 square miles) of critical habitat in the Bering, Chukchi and Beaufort seas. Read more about the proposed protections.