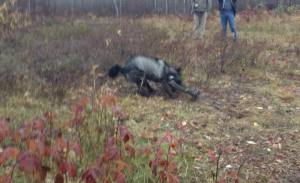 This is what is called “moral and ethical” by Wisconsin wolf killers.

Believe me, I have morals. That’s why I do it in an ethical and humane way. Feel sorry for them somewhere else, not commenting on my pictures because that’s pretty rude. Like I said, don’t like it? Then don’t look at it. Living in Wisconsin you’re guaranteed to see things like this all the time. You’re going to have to learn to tolerate it.
October 18 at 9:11am

The above quote and picture was forwarded to me yesterday. Upon further research the female killer of this trapped wolf claims that it weighed “115 pounds.” 115 pounds huh?