IF WE CAN’T SAVE THE SERENGETI – WHAT CAN WE SAVE?

Listen to the repetitive thoughts, feelings and visions you are receiving now. If they feel loving and supportive (even if a little daunting) and would make a difference to you and/or others, this is your guidance and the way we are speaking to you. Pay attention, particularly when you are out in nature, in meditation or some other quiet space as this is when you’ll be more able to receive Your prayers can be answered in many forms – including in the things that you may consider ‘small’. Each step is leading you along the way!

Believe in yourself and in your ability to manifest your desires. Do not hold yourself back because of past disappointments, but rather see them as learning curves or simply a matter of Divine Timing. As you have faith, you open the doors for what you…

The original footwear is made from high-quality Australian sheepskin, but this footage shows the brutal treatment of creatures in China whose fur is used to make the fake boots. Anybody remember the 1980 movie BRUBAKER?  It starred Robert Redford as a liberal prison warden who goes undercover as a prisoner to fight against the evil correctional system when the dead bodies of prisoners are found in secret shallow graves on the prison’s own grounds.

Well, it was only a movie.  But its whole-dead-bodies-found-in-shallow-graves trope is now a reality in the Procter and Gamble palm oil controversy.  From a Greenpeace article:

The study found that P&G purchases palm oil from three particularly problematic producers and traders, Kuala Lumpur Kepong Berhad (a Malaysian company), BW Plantations and Musim Mas (both Indonesian companies). According to the investigation, land concessions owned by these companies have experienced substantial deforestation, as well as deliberately lit forest fires, destruction of peat deposits that offer a potent source of carbon, and depletion of orangutan and tiger habitat.

Then it drops this shocking BRUBAKER-like bombshell:

Over the past year, orangutan bodies…

~~My name is: Spirit Hunter-Shield Wolf~~

We ALL are connected through the bonds of FRIENDSHIP!!

Notch the Lion-King of the Mara and His Five Sons

VERY URGENT PLEASE DO READ THIS.THIS IS VERY VERY IMPORTANT PLEASE READ SHARE.TANZANIA’S FORGOTTEN LIONS.NUMBERS DOCTORED BY MONEY FROM LION TROPHY HUNTING SO IT GOES ON ,ON MARCH THE 25 WE WON A BATTLE BUT EVEN A BIGGER WAR AWAITS US.THE WAR TO SAVE THE FEW REMAINING WILD LIONS IN TANZANIA.LOOSING THIS WAR IS NO OPTION.WE HAVE TO WIN BY ALL MEANS.NOT JUST FOR US NOW BUT FOR FUTURE GENERATIONS.IT SAYS SOMEWHERE EVIL PREVAILS IF GOOD MEN AND WOMEN DO NOTHING.SO I ASK YOU ,ARE YOU GOING TO KEEP ON THE SIDELINES AND STAY SILENT OR ARE YOU GOING TO STAND UP AND SAY ENOUGH IS ENOUGH I WONT LET LIONS BE WIPED OUT OF AFRICA.WE MARCHED ON THE 15 ,SUNG ,DEMONSTRATED OUR VOICES WERE HEARD.I ASK YOU ,ARE YOU GOING TO MAKE A CHANGE IN THIS WORLD TODAY.WHAT…

While Journey carries on his quiet existance in southeast Oregon, a group of five ambitious folks are making plans to retrace the enigmatic wolf’s footsteps, from Wallowa County to northern California, a distance of over 1,200 miles.

I received an email from Jay Simpson, who holds the lengthy title of National Geographic Young Explorer & Multimedia Documentary Producer for the Wolf OR-7 Expedition. Jay explained the purpose of the trek is to “share the story of wolves returning to the Pacific Northwest and champion the collaborations that have made his (OR 7’s) journey possible.”

The trek is the brainchild of Oregonian Rachael Pecore-Valdez, a storyteller and educator. She’ll be on the trip (which begins in May and will be on foot or on bike) as well as Dave Moskowitz, author of Wolves in the Land of Salmon, Daniel Byers, and filmmaker, Galeo Saintz, founder of Wild Peace Alliance, along…

Internet giant has done business with NSA and CIA

On Thursday the media made a big deal about Google’s announcement it has beefed up Gmail security. In a post on the official Gmail blog, Nicolas Lidzborski, Gmail Security Engineering Lead, said the corporation “will always use an encrypted HTTPS connection when you check or send email” and the change “means that no one can listen in on your messages as they go back and forth between you and Gmail’s servers—no matter if you’re using public WiFi or logging in from your computer, phone or tablet.”

Google, however, did not mention the NSA, the primary threat to online privacy, and for good reason – Google cannot protect your data from the eavesdropping colossus and, considering its past dealings with the agency, cannot be trusted to protect data.

The NSA has used a sizable portion of its classified…

“Five wolf pups from the Imnaha pack were photographed by a remote camera on July 7, 2013. The pups were approximately 2.5 months old in this photo. Photo courtesy of ODFW.”

Every day there is bad, very bad or really bad news about wolves. But “Ranking Member of the House Natural Resources Committee Peter DeFazio” is speaking out for wolves. He wants the national wolf delisting rule revoked.

Rep. DeFazio D -Oregon and 73 other House members, who oppose the national wolf delisting rule, are urging Secretary of the Interior, Sally Jewell, to keep wolves protected under the ESA and to “rescind the proposed rule immediately”.

Thanks to Rep. DeFazio and the 73 House members who joined him. We must stop this rule.

Please comment by March 27, 2014 on the proposed national wolf delisting by clicking HERE!

It may seem counterintuitive and even downright risky. But protecting habitat often involves working closely with the people doing the damage. It can mean supplying efficient sawmills to rainforest loggers who might otherwise hack the timber they harvest into planks with chain saws. It can mean helping communities in Africa manage trophy-hunting concessions more profitably so they don’t need to kill as many animals. And it can mean introducing better fishing practices to fishermen who are inadvertently killing thousands of endangered loggerhead turtles every year.

The object isn’t to make exploiting the environment easier, faster, more destructive. Instead, says Hoyt Peckham, it’s about setting up a framework to help people focus on resources that can withstand the pressure—and then get the full value from whatever they harvest. Helping them earn more while harvesting less gets their buy-in…

12th March 2014 – Flock of dead birds found on road ‘is a mystery’ in Lancashire,England. Link

There’s something exceedingly foul about how poultry is slaughtered in the United States.

First, some background: In 1958, Congress passed The Humane Slaughter Act, to require animal welfare improvements in our nation’s slaughterhouses. However, the United States Department of Agriculture (USDA) exempts poultry from its enforcement of the law, even though birds represent more than 8.8 billion of the 9 billion animals slaughtered annually in the United States.

That’s right: The agency charged with enforcing the Humane Slaughter Act refuses to enforce it for more than 98 percent of slaughtered animals.

Because the USDA refuses to protect them, most birds are subjected to abuses that would warrant cruelty convictions under federal law if cows or pigs were the victims. You really have to see poultry slaughter to believe it, but as just one example, USDA records indicate that almost a million chickens are boiled alive every year when they…

Story by MIKE TIGHE as published in the LaCrosseTribune.com

“It’s been devastating and horrific,” 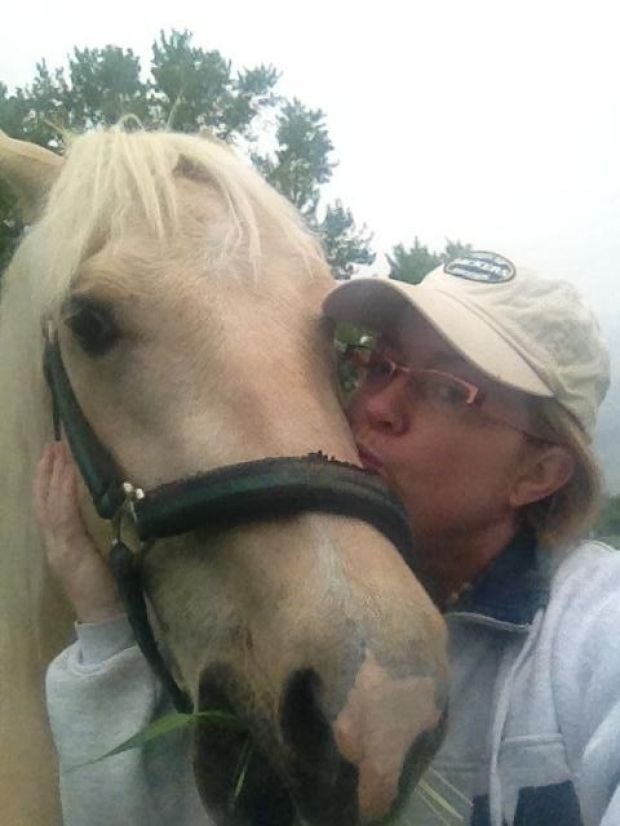 Angela Joseph describes the theft of her beloved Morgan, Jimmy, as “devastating and horrific.”

LA VALLE, Wis. — Social media sites have been sworn in to the posse trying to track down rustlers who apparently stole two horses from a farm that provides therapy for veterans and children.

“Whoever did it is pretty slimy, because anyone who knows us knows we help veterans and kids,” said Barbara Knopf, the owner and founder of Veterans Equine Trail Services (VETS).

The horses are believed to have been stolen March 14, with no signs that they simply wandered off, according to Knopf and the Sauk County Sheriff’s Department.

“We have a few leads that we can’t discuss openly at this time,” sheriff’s detective Scott Dadam said Thursday.

Meanwhile, Knopf and an Army veteran who owns one of the…